You wouldn’t know it from news coverage in the aftermath of Texas hailstorms or Florida hurricanes, but U.S. homeowner insurers are doing a better job than ever of pleasing their customers when responding to claims, according to J.D. Power.

Results of the firm’s Property Claims Satisfaction Study released Thursday showed that overall customer satisfaction with the property claims process had reached a record high 881 on a 1,000-point scale.

“Home insurers have spent a great deal of time and money refining their claims processing capabilities through a combination of improved client relationship management, enhanced technology and improved quality control,” stated David Pieffer, property and casualty lead for insurance intelligence at J.D. Power.”Getting this formula right is critical for insurers because any customer perception of undue effort or unnecessary delays experienced on the part of the customer in the claims process is directly correlated with increased shopping for a new insurer.”

One insurer scored even higher than Amica, but it wasn’t listed in the rankings because it doesn’t meet the survey criteria. USAA scored a 904. J.D. Power excluded it from the list because the carrier sells only to military families, not the general public. 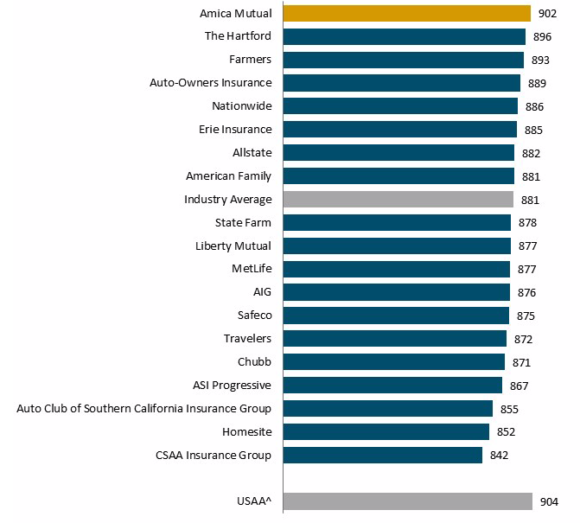 J.D. Power said two factors most likely to persuade consumers to shop for new policies were claim-related premium increases and too much effort required to get claims resolved. When insurers don’t measure up in those areas, overall satisfaction decreases by 85 points and customers become 13.5 times more likely to shop for a new policy.

The score for property claims was the highest rating of all of J.D. Power’s consumer satisfaction studies for service industries in the United States and Canada. By comparison, auto claims scored 868, mail order pharmacy 867 and direct banking 860, the company said.

The survey showed that consumers like being able to file claims electronically and enjoy “self-management tools,” but they don’t want to be too high tech. J.D. Powers said 27 percent of customers still prefer the entire claims process to be handled offline and just 4 percent said they would prefer a digital-only claims experience.

J.D. Power’s survey included responses only from consumers who had experience filing a claim, so the high satisfaction rankings stand in sharp contrast to some of the press coverage about the way insurers respond to claims.

The Dallas Morning News’ Watchdog column raked USAA over the coals last November for receiving an “F” rating by the Better Business Bureau. The newspaper profiled one complaint by a homeowner who had been fighting the carrier for 18 months to get his roof replaced after a hailstorm.

The bureau told the newspaper that USAA did not report how it resolved 45 complaints that were reported to it. Also, USAA had paid $15 million to settle a complaint by the U.S. Consumer Financial Protection Bureau for mishandling personal back accounts.

A spokesman for USAA told the Morning News that his company has chosen not to share with the Better Business Bureau what actions it has taken to resolve complaints. He noted that USAA is regulated by the Texas Department of Insurance, which has posted data showing it received relatively few complaints compared to other carriers.

Insurers carriers got similar bad press after Hurricane Irma made landfall in the Florida Panhandle in 2017. The state Office of Insurance Regulation reported a year after the storm had passed that 8% of the claims filed for hurricane damage were still unresolved. Consumers groused during legislative hearings that carriers had made low-ball offers, or blamed flooding for damages that had clearly been caused by wind.

The J.D. Power survey measured satisfaction with the property claims experience among insurance customers who have filed a claim for damages by examining five factors: settlement; claim servicing; first notice of loss; estimation process; and repair process. Responses came from from 6,025 homeowners insurance customers between April and December 2019.

Sams is editor of the Claims Journal. He can be reached at jsams@wellsmedia.com. More from Jim Sams