About 25 years ago, Mark Avery first diagnosed “Mardi Gras syndrome.” This condition, Avery writes, “is evidenced by an excessive urge to drink heavily, a desire to attend numerous outdoor events such as parades, and, in some claimants, the ability to perform physical acts their doctors, and certainly their attorneys, never thought humanly possible (i.e., carrying people on their shoulders, running, jumping, twisting and lunging for beads, standing for extended periods of time, etc.).” 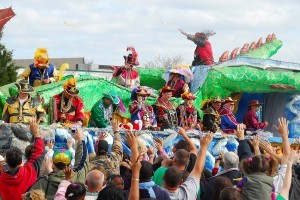 Avery’s diagnosis is neither medical or psychological; Avery is neither a doctor nor a psychologist. He did not write up his findings for a journal article or popular magazine.

The quote above is from a solicitation letter that Avery, who graduated from the University of South Carolina with a degree in criminal justice and another in human and social science, sends annually to 600 or 700 businesses, insurance companies and lawyers in and around New Orleans.

With the letter Avery helpfully includes a Mardi Gras parade schedule, and this pitch:

“Insurance fraud is a serious problem. Now is the perfect time of year to use our highly professional and well-trained surveillance investigators to discover claimants who might be engaged in fraudulent claims against your agency or your clients. If you have a case in which you are having serious reservation about the severity of the claimant’s injuries, then give us a call to see if we can help.”

Avery, 52, is a private investigator who, operating out of an office in Terrytown with a staff that ranges from 12 to 16, has made a tidy living surreptitiously following people and shooting video of them doing things that their accident, slip-and-fall, workers’ compensation or disability claims indicate they ought not be able to do.

And for Avery, Mardi Gras is truly something to celebrate.

“People just lie and lie and lie about their condition – then they’re at Mardi Gras and they just forget about everything around them,” he said. “All they can focus on is where the parade is and the party.”

For Avery, the most common catch at Mardi Gras is the ladder carry.

The claimant – with their purported neck, shoulder, rotator cuff or back injury – will head to the parade route with a ladder over his shoulder and children in tow. “They’ll put their kids in a box on the top of the ladder that seats two children in it. They’ll climb up the ladder themselves to get a better view, to stand out so when the floats ride by; they’ll stand out and get more throws.”

And then there are the bead-related exertions – throwing, catching and bending down to pick them. Even a powerful clutch can be evidence that the carpal tunnel syndrome is less crippling than claimed.

Each year, Avery prepares for Mardi Gras with a list of potential targets who live near parade routes. He and his team case their houses from the outside to see which ones show visible evidence of most being in the Mardi Gras spirit. Then, their ripest targets chosen, on the morning of each parade day, they discreetly park one of their fleet of surveillance vans down the street and patiently wait for the person playing the insurance company for suckers to take the irresistible bait.

And, indeed, Avery presumes most of those he is paid to surveil are frauds.

If a client is willing to pay him to try to catch a claimant in the act, “the claims adjuster and the defense attorney have a pretty good feeling the claimants are lying. They’re pretty much right 95 percent of the time.”

Blending in with the crowd

Avery and his team are skilled in covert videography, but that is hardly an issue at Mardi Gras.

“At Mardi Gras everybody’s got cameras and phones, taking pictures, so we sort of blend in,” Avery said. “You can put the camera on a tripod right out in the open and videotape people. You put a hat on, put some beads around your neck and you blend in and just look like everybody else. If they turn back to look at you, you just look like you’re taping something down the road.

“I would say our success rate is 75 to 80 percent” of those who walk out their front door, Avery said. “We get them doing one thing or another.”

Sometimes “another” has nothing to do with their claim.

“We catch them doing things at the parade routes, doing drugs, smoking weed,” Avery said. Recently, though not at Mardi Gras, they got nice footage of the target shooting heroin.

None of which is, strictly speaking, germane to their claim, but it might tell a jury, “this is who we are dealing with.”

‘I’m suspicious of everyone’

Early in his career, Avery did “internal espionage.”

“I would go in as an undercover employee into plants to find people who were stealing parts, people who were not showing up on the job and other employees are clocking in their time sheet for them, doing drugs. Caught a lot of people.”

In 1987, he moved with his wife, a geologist who got a job with Chevron to Louisiana, first to Lafayette and then New Orleans, and started his business, Deep South Investigations, which he named because he played with the Deep South Rugby Union. His territory is Louisiana and the Gulf Coast.

He does the full range of private investigator staples – marital infidelity cases, background checks. He did some opposition research work for Rep. Cedric Richmond, D-New Orleans, in his congressional campaign.

But insurance company surveillance work is his bread and butter.

“I like getting out there and doing surveillance,” he said. “It’s just interesting. I like the excitement of it. I like following people because they don’t know I’m following them.”

And he said, everybody files false claims, people of every race, creed and station: waiters, cooks, attorneys, politicians.

“Oh, I’m suspicious of everyone. I don’t believe anyone. You have to prove to me before I will believe it. I’m a skeptic,” Avery said. “I’m pretty savvy at reading people. In this business I’ve seen a lot and heard a lot.”

But perhaps to nurture his sunnier side – and to provide his and other neighborhood kids with jobs and some business experience – he has also opened up a snow-ball stand next to his office on Stumpf Boulevard: Sweet Shack Snowballs.

“Snow-balls in New Orleans are different than anywhere else,” Avery said. “`The ice is shaved very fine. It melts in your mouth. There is no ice left in your cup. And you can stuff it with ice cream and a little condensed milk and chocolate syrup.”

But that’s another story.