Personal auto fraud involving hit while parked claims is on the rise, according to the National Insurance Crime Bureau. A large portion of the estimated 120,000 claims reported each year to the NICB relate to personal auto claims, said Special Agent John Antillon.

“A large percentage of those are claims that are filed when a vehicle is reported to be parked and then struck,” he said, during an interview with Claims Journal at the Combined Claims Conference held in Orange County, Calif., recently.

Some of them, he said, have red flag indicators that may indicate fraudulent activity. A delay in reporting a claim is one such possible indicator.

“So, the insured will contact the adjuster…days or a week after the reported date of loss and it also coincides with, maybe, the policy had lapsed and then it was reinstated shortly before the reported loss was filed,” Antillon explained.

Other possible indicators of fraud include a history of previous similar claims or the damage reported may be inconsistent with the facts of the loss. 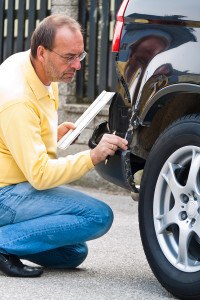 Another clue that may indicate fraud is if the vehicle has been moved. Antillon offered the example of a vehicle now parked in the insured’s driveway, but the facts of the loss indicate it was struck while parked at the curb with major damage to the right front corner. The adjuster comes by to inspect it and finds it in the driveway with no evidence of debris in the street.

Other indicators are obvious like damage to the wheels, suggesting they were in motion or airbag deployment.

“They don’t deploy when a vehicle is parked. It’s off, so the electrical system is not functioning,” Antillon said.

It’s important to compare all of the information that is offered on the policy, he said.

“Are there excluded drivers in the house? Is there, maybe, some motivation why the insured would want to file that claim to obtain coverage? What might be some other motives for them to do that type of thing,” he added.