“When you are dealing with an upset claimant or a policyholder, what you want to do is calm them down,” said Shames. 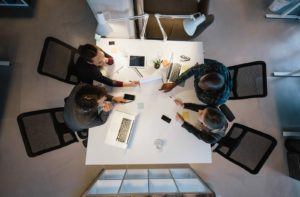 Being direct, paying full attention to them and asking pointed questions supports a clear intention of what you want to achieve, she said, adding that this tactic will help reduce their anxiety level.

Rushing to get to a resolution can hinder the claims process, Booth said.

“If you just display some empathy then you’re going to shorten the time toward resolution because oftentimes…if they’re upset they want to be heard,” he added.

Shames said that it is important to be specific and to avoid generalities.

Gender differences in communication can hamper female adjusters in claims handling, as well as those who want to move up the ladder.

Women were taught to leave themselves out of presentations and communication, she said. This means that females may be less experienced in public speaking. For example, Shames said women tend to talk too long with run on sentences.

“Their voice, if they’re younger, can also go up at the end of every phrase which makes them sound unsure and as if they’re asking a question,” said Shames.

Short sentences or phases with a downward inflection is key, she said, as it allows a claimant or policyholder to ask a question or correct any misinformation.

Shames, author of “Out Front: How Women Can Become Engaging, Memorable and Fearless Speakers”, said the intent is to have a dialogue, rather than lecture someone.

Men have no trouble communicating their triumphs, while women tend to like to work behind the scenes, she said.

“That holds us back. A true leader needs to speak out,” Shames said. “If we’re going to put ourselves out front, it’s incumbent upon us to learn to speak well, to have a clear intention, to tell stories and to connect with and engage with an audience.”

Even men can be shy speakers, said Booth, especially if they are outside of their area of expertise.

Men and women often believe an audience or client is judging them harshly, Shames said, when that is not the case at all.

“An audience or a client wants you to give them something of value, a takeaway,” said Shames.