Eleven months ago, Houston had a deadly flood. This week, the city had another. 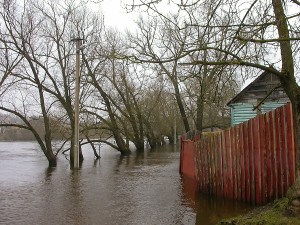 “Over the span of 30 years, which is the length of many people’s mortgages, there is a once in four chance it is going to happen,” said Mari Tye, a project scientist in the mesoscale and microscale meteorological laboratory at the National Center for Atmospheric Research in Boulder, Colorado. “Over 100 years, there is a 67 percent chance.”

And that doesn’t take into account other conditions that can alter the outlook, including changing climate or the effects of El Nino or La Nina.

“That’s why the 100-year event is such a moving target, especially in an urban environment,” said Chuck Watson, director of research and development at Enki Research, which develops tools to measure hazards. “Someone builds a couple of parking lots, and you just turned a 100-year event into a 70-year event because of the impervious surfaces.”

Asphalt doesn’t soak up rain water; it just sends it somewhere else, such as into the house next door. When you add in natural climate cycles, the results are further skewed, Watson said from his office in Savannah, Georgia. One of the influences of El Nino is to send more rain across the southern U.S.. In a situation like that, the chances of a catastrophic flood might rise to one in 20.

At least seven people died in Houston in this week’s rain, according to CNN. The bulk of the downpour was Monday, when a daily record 9.92 inches (25 centimeters) fell at George Bush Intercontinental Airport, the National Weather Service said. Some areas received more. At least 100,000 customers lost power, the city’s light rail was shut and water was over the banks of more than half of its 22 bayous and creeks, which help with flood control.

“If you get that much rain, there is no place for the water to go,” said Jill Hasling, who founded the Weather Research Center in the Texas city.

The current flood is worse in some ways than the one last May, Hasling said in an interview at the American Meteorological Society’s Hurricanes and Tropical Meteorology conference in San Juan, Puerto Rico. Parts of the city that were dry a year ago are inundated now.

That flood damaged more than 2,500 homes and killed more than 30 people in Texas and Oklahoma, according to reports at the time. A little more than 35 percent of the state had been suffering some level of drought, but by the first week of June the share had dropped to less than 1 percent, the U.S. Drought Monitor reported.

This reveals another problem with trying to quantify extreme events – things can always get worse, which makes it difficult to come up with a worst-case scenario.

“With all our records, we don’t know what the most extreme is, because they are rare,” Tye said. “You make an estimate of the probability and then another storm comes along that is worse.”

As for Houston, Hasling has some advice: “There’s more than one flood a year in Houston. If you live in Houston, buy flood insurance. If you are not in the flood zone, buy it anyway; it will just be cheaper.”