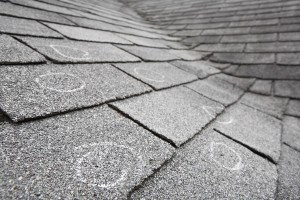 Relying on self-reported roof age to make underwriting and claims decisions has left carriers with unreliable data built into the claims process. As we covered in the first two research papers in this series, most homeowners do not know the age of their roof and, when forced to guess, they tend to underestimate the age. As a result, carriers making claims settlement decisions often underestimate the age of the roof – an underestimation that could be costing carriers $4 per policy, per year, across their entire book of business.

Historically, carriers typically have offered replacement-cost (RC or RCV) coverage for roofs, where a carrier pays to replace a damaged roof. In addition, many carriers have a policy to pay only a portion of the value of the roof at the time of loss and then pay the remaining replacement cost value, or hold back, when the insured repairs or replaces their roof.

A growing trend in the industry is for carriers to offer actual-cash-value (ACV) coverage on roofs. Sometimes this is for all roofs. Other times it is just for roofs above a certain age. In such cases, homeowners would be paid the actual cash value of their roof minus depreciation.

There are four common indemnification scenarios carriers use in which relying on inaccurate roof age can have a financial impact based on the roof risk strategy.

1. Actual-Cash Value Coverage on Roofs Over a Certain Age

In this situation, systematically underestimating roof age results in a double whammy for carriers: first, at time of underwriting, in determining whether the roof is eligible for actual-cash-value coverage, and then when determining the actual cash value of the roof when a claim is settled.

2. Actual-Cash Value Coverage on All Roofs

Like the previous scenario, carriers underestimating roof age are generally under depreciating roofs and settling claims for more than is necessary or required.

With replacement-cost coverage, miscalculating the hold back value, a number often derived by the age of a roof, deprives the carrier of potential investment income. An insufficient holdback may encourage some homeowners to take their insurance payout and not replace their roof at all.

A number of claims organizations have implemented roofing deductibles that get applied before replacing a roof. Unreliable roof age can mean the difference between this deductible being enforced or not.

Working with Symbility, a provider of cloud-based and mobile technology for settling insurance claims, BuildFax quantified the financial impact of roof age in the claims process. Symbility reviewed claims from a sample of industry data and found that the roof age used to settle the claim was supported by permit-derived roof age data just 3 percent of the time. In 4 out of 5 claims (80 percent) the permit-documented, roof age was older. Twenty percent of these were off by seven years or more (straight-line depreciation; no adjustment for condition). 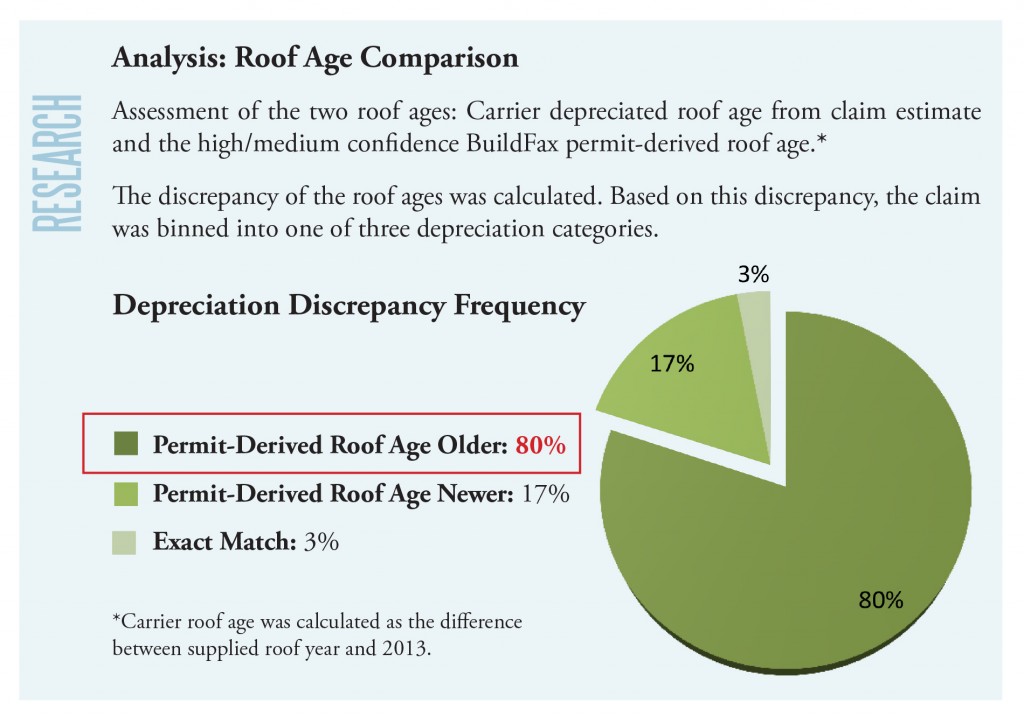 In 80 percent of the claims analyzed, BuildFax reported an older roof age than what was reported by the adjuster. This could have resulted in a significant overpayment for claims handled within an ACV policy environment. For example, on a typical roof claim worth $10,000, the difference in depreciation averaged approximately $2,000. In an RCV policy environment where RCV coverage is not applied until an actual repair or replacement occurs, miscalculating a hold back value using an incorrect roof age would have reduced potential investment income through miscalculating the hold back amount. 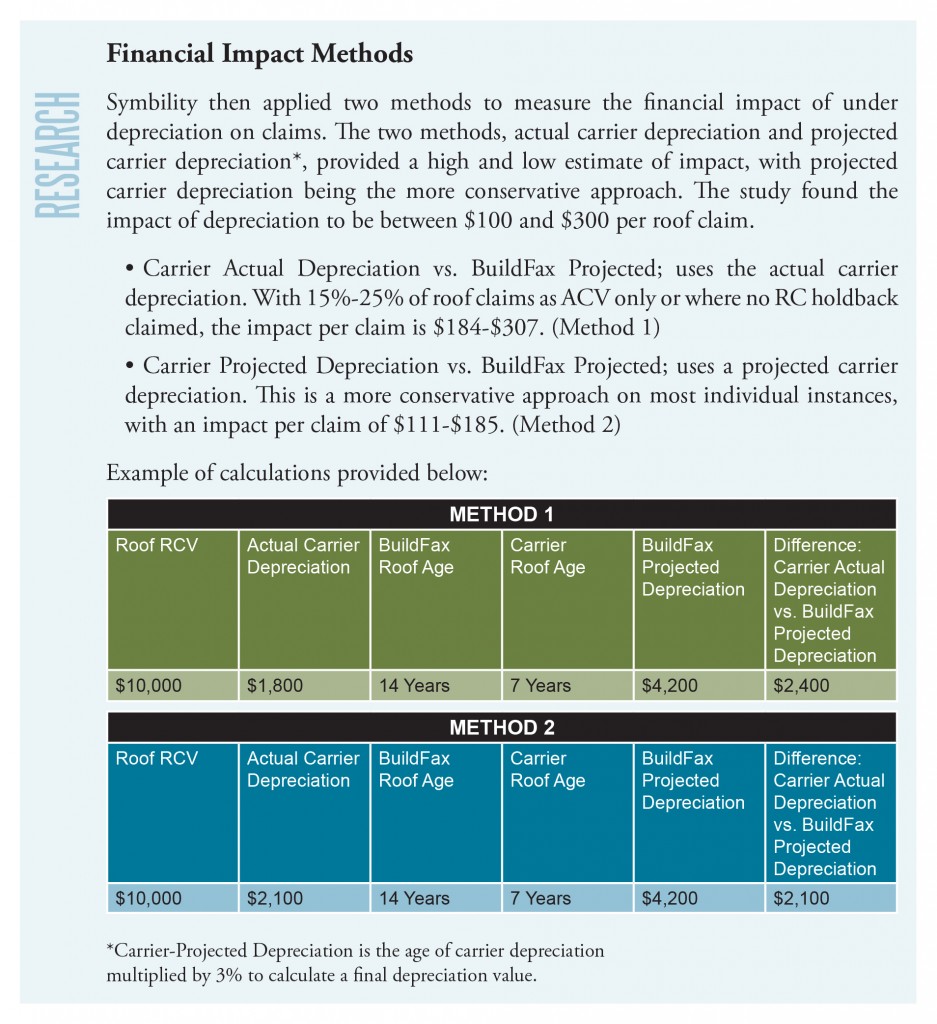 The Value of Accurate Roof Age

Insurance carriers have always known that property condition matters—especially roof condition. We can now see the bottom-line financial value of illuminating the risk of loss and the potential size of that loss with accurate roof-age data. With accurate data, carriers can now make better decisions at every step in the process, including claims.

Lately, it seems that the roof is all that the residential homeowners’ insurance industry talks about. While we at BuildFax have significant data and knowledge around one aspect of the roof—the age—we realized that no single, succinct source existed to detail the comprehensive story around why the roof risk is so omnipresent today, and what the industry is doing about it. So we interviewed as many interested parties as possible—from the C-suite to actuaries, underwriters, and adjusters; from agents and inspectors to data, imagery, and platform vendors. This series of research papers is the result of more than one hundred hours of interviews and discussions, and we hope it is helpful to you. Thank you to all of the individuals who participated in the lengthy interview process and to Symbility for their partnership on this latest research effort.

If you have any questions, comments, or suggestions on the research and analysis we have outlined in this paper, we would love to hear from you. We have created a web site that will have updated versions of the paper and information on how you can provide us with your feedback. We also recommend that customers take advantage of BuildFax’s complimentary loss analysis to verify that BuildFax roof age works for their book. Please visit http://www.buildfax.com/roofrisk/ or call us at 855-237-8711.

·Research Paper: The Evolution of the Roof Risk, April 2013