Accurate Roof Age Is Hard, But So What?

The Cost of Inaccuracy with an ACV Strategy

According to insurers we spoke with, the #1 solution to the roof problem is ACV. One theoretical benefit of an ACV strategy is that homeowners will have to take over the replacement of roofs due to age. In other words, carriers will only be on the hook for replacing roofs due to wind events that damage relatively new roofs. However, carriers will misclassify some number of roofs as being less than 15 years old when they are, in fact, older. In this section, we will break down how much misclassification we would expect to see in a typical carrier’s book, and how much that misclassification will cost.

Your Roofs are Older than You Think 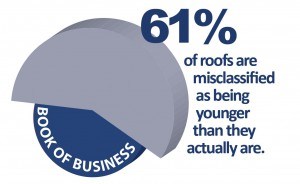 At BuildFax, we analyzed a significant amount of roof age and our data shows that 61 percent of roofs on carriers’ book are older than carriers realize. The misclassification scenario is fueled by inconsistent roof age sources, like Homeowner-Supplied Roof Age (HOSRA). Based on BuildFax’s analysis of HOSRA, at least ten percent of a carrier’s book will be misclassified as being younger than 15 years old and eligible for replacement-cost coverage when it should have ACV coverage. Graphics

The Misfortunes of Misclassification

There are two significant points of pain related to misclassifying an older roof as being eligible for replacement-cost coverage.

So not only are insurance carriers on the hook for paying out replacement costs improperly, but they will also experience more loss with the misclassifiedpolicies than they expect.

The Cost of Misclassification 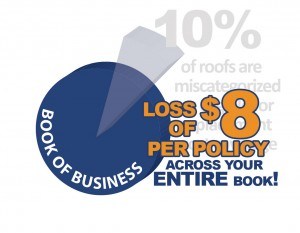 Using these values, the cost of misclassifying just ten percent of a book works out to a scenario where a carrier expects to be paying $160/policy (2 percent loss frequency at $8,000 per replacement) for the set of misclassifiedpolicies, but ends up paying $240/policy (3 percent loss frequency). Therefore, misclassification on just 10% of a carrier’s book works out to unexpected losses of $8 per policy, per year across the entire book of business.
At an average premium of $909, this increases the carrier’s loss ratio by about 1 point. 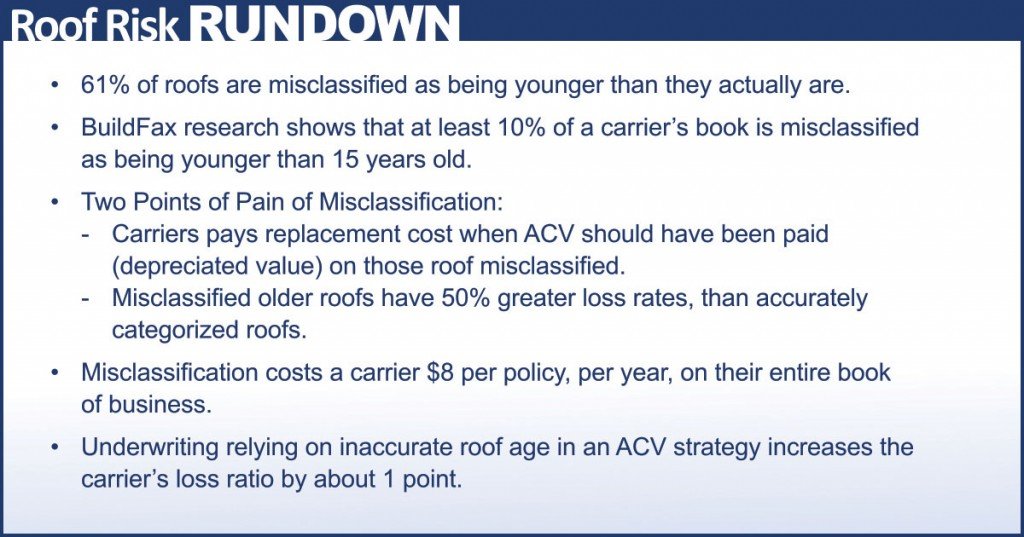 The Cost of Inaccuracy with a Rating Strategy

The cost of inaccurate roof age in rating is premium leakage. We have found that a simple way of calculating the amount of leakage—at least for rough calculations—is to look at the difference in pricing between roofs less than 15 years of age and roofs 15 years and older.

Older the Roof, Higher the Premium 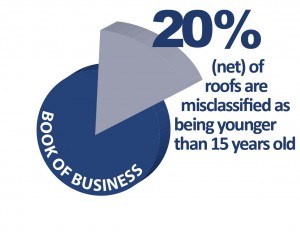 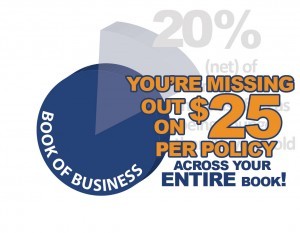 So, assuming that the average annual premium is $909, and homeowners with old roofs pay roughly 15 percent more (according to a BuildFax survey of various roof age/material factors filed with state regulators across the U.S.), we get a rough calculation that homeowners with older roofs should be paying around $135 more per year than those homeowners with younger roofs. And if 20 percent (net) of all roofs are misclassified as being younger than 15 years old, then that works out to around $25 per policy per year over the entire book, or an increase to the carrier’s loss ratio of almost 3 points.

The Cost of Inaccuracy in Product Development

In addition to making both ACV and rating strategies significantly less effective, HOSRA also has an insidious influence on rate-making. Because the majority of carriers only have HOSRA with which to create products, and HOSRA regularly misclassifies older roofs as being younger, rate plans are generally too “flat”. That is, homeowners with younger roofs are charged too much, and homeowners with older roofs are charged too little. 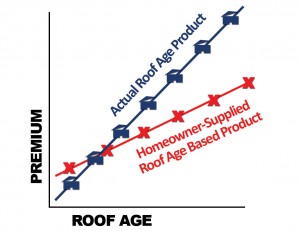 Our analyses found that the impact of improving product rate plans by charging those with younger roofs less and those with older roofs more would be about half the impact of using accurate building-permit-derived roof age compared to HOSRA in the rating plan. That is, we would expect the overall impact on loss ratio to be in the neighborhood of 1 to 1 ½ points.

The Value of Accurate Roof Age

No matter what strategy a carrier is utilizing currently to tackle roof risk – ACV, Rating, or Product Development – an improved loss ratio requires more accurate roof age at underwriting. As our analyses shows, there is significant impact to a carrier’s loss ratio (around 1 to 4 ½ points) when using Homeowner-Supplied Roof Age (HOSRA) compared to the more accurate building-permit-derived roof age.

Lately, it seems that the roof is all that the residential homeowners’ insurance industry talks about. While we at BuildFax have significant data and knowledge around one aspect of the roof—the age—we realized that no single, succinct source existed to detail the comprehensive story around why the roof risk is so omnipresent today, and what the industry is doing about it. So we interviewed as many interested parties as possible—from the C-suite to actuaries, underwriters, and adjusters; from agents and inspectors to data, imagery, and platform vendors. This series of white papers is the result of more than one hundred hours of interviews and discussions, and we hope it is helpful to you. Thank you to all of the individuals who participated in the lengthy interview process.

If you have any questions, comments, or suggestions on the research and analysis we have outlined in this paper, we would love to hear from you. We have created a web site that will have updated versions of the paper and information on how you can provide us with your feedback. We also recommend that customers take advantage of BuildFax’s complimentary loss analysis to verify that BuildFax roof age works for their book. Please visit http://www.buildfax.com/roofrisk/ or call us at 855-237-8711.