“They’ve done studies, you know. 60 percent of the time, it works every time!”

Things are worse than you think. So, it turns out that if an insurance agent (or underwriter) asks someone, “How old is your roof?”, the answer will usually be a significant underestimate. Not the thing a carrier wants to hear considering the increased exposure to risk associated with older roofs. We at BuildFax found that more than two-thirds of all homeowner-supplied roof ages (HOSRA) are underestimated by more than five years, and that more than twenty percent are underestimated by more than fifteen years. But the great thing (from an evidence standpoint, at least), is that you don’t even need to use BuildFax’s roof age to see how inaccurate HOSRA is. This article uses some common sense and a little math to examine the accuracy of HOSRA and compares HOSRA to BuildFax roof age. Finally, we’ll explore some options for fixing the inaccuracies of HOSRA.

We’ve reviewed north of 4 million policies; however, for purposes of this article we are looking at a representative sample of 391,309 residential single-family homes for which BuildFax had a HOSRA (Homeowner-Supplied Roof Age). Before looking at the HOSRA values, we decided to estimate what we thought the roof age distribution should be throughout the set. We decided to focus on only the homes that would likely have only had one or zero roof replacements in their lifetimes—that is, homes that were no more than 30 years old. We looked at four different scenarios: assuming that 3 percent, 5 percent, 7 percent, or 10 percent of all roofs were replaced each year. Under those different assumptions, BuildFax found the following home age versus roof age distribution:

From a common-sense perspective, which of these annual replacement percentages seems the most accurate? Fairly recent statistics state that around 3 percent of all insured homes usually have a wind/hail claim each year, so that would be a good lower bound. Given that most asphalt shingle (the most common roofing material) warranties seem to be for 15 to 20 years, and various guides suggest that the average life of an asphalt shingle roof is up to 20 years, we would propose that 7 percent would be the highest reasonable upper bound. Based on the above, 3 percent to 7 percent is a sensible real-world estimate for the percentage of homes with a roof replacement in a given year.

3 percent to 7 percent of homes have a roof replacement in a given year, according to our real-world estimate.

We now compare the homeowner-supplied roof ages in our set of residential single-family homes to the prior section: 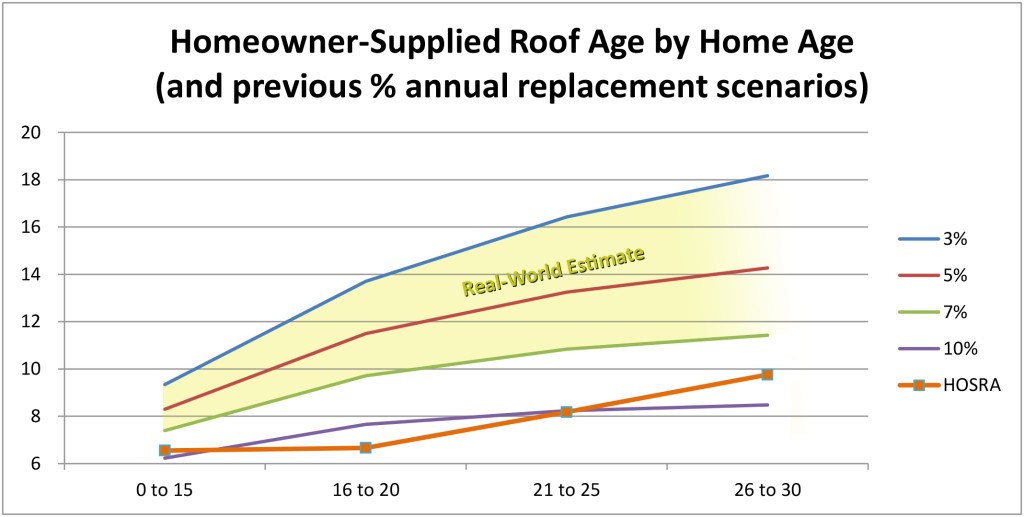 We see that HOSRA is closest to the 10 percent annual replacement scenario, which means that if HOSRA is accurate, then the average homeowner replaces his or her roof every 10 years or so—which is half the amount of time that the shortest asphalt shingle warranty covers. If HOSRA is accurate, then the average 30-year old home is on its fourth roof. Based upon this common-sense analysis, we find it highly unlikely that homeowner-supplied roof age is accurate.

According to homeowner supplied roof age, the average homeowner replaces his or her roof every 10 years—based on the real-world estimate stated earlier, common sense tells us this is highly unlikely.

So where does this leave your roof age? If HOSRA is not the dependable source for accurate roof age, then what other options are available? Carriers can look to third-party data sources, such as building permit data, to supplement HOSRA in order to increase accuracy of their roof age.

But first let’s take a look at how roof age provided by building permits relates to HOSRA. For each of the residential single-family homes in our test, we pulled BuildFaxroof age—roof age intelligence derived from building permit data—and compared that to the HOSRA and the calculated roof age from home age above:

The BuildFax roof age hews closest to the 5 percent annual replacement line, and is between the 3 percent and 5 percent lines at 26-30 years old. This is much closer to the upper and lower bound stated earlier—what we would expect roof ages to be—than what we see with the HOSRA numbers.

If insurance carriers are going to address the wide difference in risk profile between new roofs and old roofs, they will ultimately have to allow homeowners to be part of the roof-age-supplying process. In other words, we’re all stuck with HOSRA. And we see three major reasons why HOSRA is inaccurate: most homeowners do not know how old their roofs are, homeowners have an incentive to underestimate their roof age, and insurance carriers do not validate HOSRA.6 We are highly unlikely to solve the first two issues, so the best solution is to validate HOSRA.

We think the best way to validate HOSRA is to bring third-party data in to validate roof age during the underwriting process. For most of our customers, this means starting with building permit derived roof age pre-filled into data-entry forms once an agent or underwriter knows the property address. Homeowners who do not know the age of their roofs are much less likely to create an underestimated roof age in a situation where an agent has access to accurate and reliable roof age pulled from an independent public data source. And ultimately, more accurate roof age will benefit consumers much more than the muddle that pure HOSRA provides.

Most homeowners do not know how old their roof are and have an incentive to underestimate their roof age; therefore carriers must start validating roof age through third-party data sources in order to mitigate roof risk exposure.

Lately, it seems that the roof is all that the residential homeowners’ insurance industry talks about. While we at BuildFax have significant data and knowledge around one aspect of the roof—the age—we realized that no single, succinct source existed to detail the comprehensive story around why the roof risk is so omnipresent today, and what the industry is doing about it. So we interviewed as many interested parties as possible—from the C-suite to actuaries, underwriters, and adjusters; from agents and inspectors to data, imagery, and platform vendors. This white paper is the result of more than one hundred hours of interviews and discussions, and we hope it is helpful to you. Thank you to all of the individuals who participated in the lengthy interview process.

Parts 2 and 3 Coming Soon: BuildFax explores The Numbers Behind the Roof Problem and Uncovers the Secrets to Successful Roof Risk Strategies

If you have any questions, comments, or suggestions on the research and analysis we have outlined in this paper, we would love to hear from you. We have created a web site that will have updated versions of the paper and information on how you can provide us with your feedback. Please visit www.buildfax.com/roofrisk or call us at 855-237-8711.

Feds Send $930 Million to Curb ‘Crisis’ of US West Wildfires