Avoid these three traps to maximize the success of your roof risk strategy.

From carriers to agents, inspectors to vendors, BuildFax conducted interviews with numerous insurance professionals to identify the number one trend in the roof risk problem ─ ACV. However, those we spoke with did point out that this solution is not without its pitfalls. 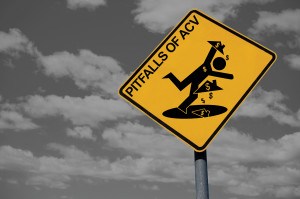 Another pitfall of ACV coverage is unrepaired or mediocre repairs. When the cost of a repaired roof significantly exceeds the loss payment, as is common in ACV payouts, many customers may opt to just “take the money and run” and leave the roof unrepaired—or partially repaired by an unlicensed contractor (aka The “Cousin Bob” Repair). This problem is only made worse by storm chasers, who will have even less incentive to do any significant repairs on the roof with a partial payment. There is a potential for ACV coverage on roofs to open carriers up to significant future risk by insuring roofs that the carrier thinks are repaired, but remain partially damaged. This leaves open the possibility for future events to further compromise the roof and significantly damage the rest of the structure and the contents.

3.The customer says, “What is ACV again?”

Many industry leaders are concerned about ACV roof coverage’s impact on customer satisfaction. The customer satisfaction issue—made more important due to the static nature of the homeowners’ insurance market—is that customers will not properly understand that they may have to pay significant amounts of money out of pocket to properly repair their roof after damage. Given the aging housing (and roof) stock in the U.S., a very likely scenario is that a customer will need $10,000 for a new roof, but will only get $4,000 from her carrier after depreciation and deductible. Many property owners will not know what “ACV” is, and some interviewees were concerned that insurance agents may not be explaining it properly to their customers.

As more carriers adopt ACV—WATCH OUT! This problem gets bigger. Are we headed toward customer satisfaction troubles with ACV and hold back policies? Are we creating an epidemic?