Insured thunderstorm losses are much higher than they have ever been, and there is no sign that they will return to lower levels any time soon. Moreover, the current state of the insurance industry—from the focus on heavy marketing to standard replacement cost coverage on roofs—exacerbates these losses, creating a real “roof problem.”

In part 1, we describe the depth of the roof problem and the structural difficulties within the insurance industry that make solving it both really hard and critically important. Part 2, scheduled for publication on Monday, April 29, describes a four-step path that the most adept carriers have followed to solve the roof problem. And the last part, to be published on Monday, May 6, discusses the two types of problems that many carriers have since seen with their roof problem solutions, as well as current approaches to addressing these new problems in detail, and focuses on key takeaways.

While it is difficult to get a handle on the number of thunderstorms each year in the U.S., it seems fairly clear that the number of severe storms has gone up. Eberhard Faust, head of climate risk and natural hazards research at MunichRE, recently presented a study showing that inflation-adjusted annual losses due to severe thunderstorms (>$250 million in damage) have doubled since 1970. In an effort to explain this, Faust’s team has found that storm formation seems to be easier now than it was 40 years ago, although he does not know whether this is natural climate variability or man-made climate change.

The median age of a home in the U.S. is steadily increasing, from 25 years old in 1987 to 35 years old in 2010. (The boom building years of the early 2000s only paused this aging). This means that in many parts of the country, the majority of homes still have their original roof, which makes them particularly susceptible to damage for two reasons: Older roofs are more likely to fail in storms than newer roofs, and older roofs are more likely to be built with less resilient materials than newer roofs (as newer materials did not exist and/or were not generally in use). 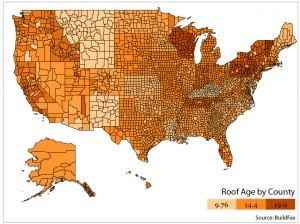 The price of roof replacements has been increasing for at least two reasons: The cost of asphalt shingles has outpaced inflation for several years now, and building codes and roofing best practices have resulted in more time and materials requirements in a typical roof replacement. The most extreme—and perhaps industry-defining—state is Florida, which adopted an extremely strict building code after Hurricane Andrew, and which has the most expensive roofs in the U.S.

Most homeowners’ insurance policies provide replacement cost coverage on roof damage due to a thunderstorm, according to our interviews. As the number of severe storms has increased, roofs have aged, and the cost of roof replacement has increased, carriers have felt the pain of replacing roofs at a cost that can take more than a ten-year payback period.

Finally, our interviews revealed strong anecdotal evidence that “storm chasers”—businesses that go door-to-door in areas hit by storms (both immediately after, and, in slow periods, months after) to do roof repairs and be paid by the carriers—have exacerbated the roof problem. The main concerns about storm chasers are that they may be acting fraudulently by actually causing damage to the roof (under the pretext of “going up there and checking things out”) and/or by taking the claims check and not actually doing any repairs (or doing a terrible job).

The Context of the Roof Problem

Before discussing potential solutions to the roof problem, we find it useful to review the context in which insurance carriers must tackle the problem. We have identified four elements that make solving the roof problem critically important while also showing how incredibly difficult it will be: the current focus on increased marketing, the relatively static set of potential customers, the lack of support from law enforcement, and the worst return on equity in 30 years.

Recent years have seen significant in property casualty insurance advertising, which has had an increased focus on price. These trends have been driven by the executive leadership of carriers, who—by and large—wish to see significant customer growth. Backed by executive sponsorship, the marketing departments within carriers have successfully increased their budgets and have been doing their best to deliver more and more prospects through the door. This momentum toward increased customer acquisition is unlikely to stop any time soon, which means that any “writing bad risks” problems will be exacerbated.

Another difficulty in addressing the roof problem is that the homeowners’ insurance market has a much more static set of customers than most other markets—the number of new customers to the homeowners insurance market is much smaller than the existing set of customers, and the majority of existing customers will be in the market for decades. This makes customer satisfaction absolutely critical, which means that any missteps may take a generation to clear out.

Insurance carriers also can’t count on any significant help from law enforcement, according to our interviews. While states would like to shut down “storm chasers” in theory, in reality they only crack down when contractors either fail to do any repairs at all, or if they are caught actually damaging the roof. At best, “storm chaser” laws create some consumer protections (e.g., allowing customers to cancel contracts if insurance doesn’t cover all of the work) and codify some good business practices (e.g., requiring contractors to provide contact information), while doing almost nothing substantive to prevent the practice.

Finally, the roof problem might not have come at a worse time: As has been said many times, a 100 percent combined ratio is hard enough. Specifically, Bob Hartwig of the Insurance Information Institute frequently points out that a combined ratio of 100 in 1979 yielded a return on equity of 16 percent, whereas a combined ratio of 100 in the past few years has yielded a return on equity around 7.5 percent. At the same time that the industry needs more profitable products, the roof problem is making homeowners products much less profitable.

Part 2, scheduled for publication on April 29, will describe a four-step path that the most adept carriers have followed to solve the roof problem.