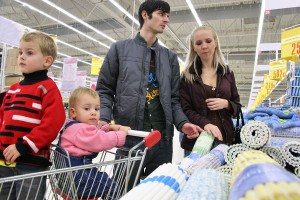 The study, conducted by researchers in the Center for Injury Research and Policy of The Research Institute at Nationwide Children’s Hospital, examined data relating to children younger than 15 years of age who were treated in U.S. emergency departments (EDs) from 1990 through 2011 for an injury associated with a shopping cart. An estimated 530,494 injured children were documented during the study period, averaging more than 24,000 children annually – which equals 66 children per day or one child every 22 minutes treated in an ED.

The study, recently published in the January print issue of Clinical Pediatrics, found that falls from a shopping cart accounted for the majority of injuries (70.4 percent), followed by running into/falling over the cart, cart tip overs and entrapment of extremities in the cart. The most commonly injured body region was the head (78.1 percent). While soft tissue injuries were the most common diagnosis for these head injuries, the annual rate of concussions and closed head injuries (which are concussions and internal head injuries) increased significantly by more than 200 percent during the study period, with the number of these injuries going from 3,483 injuries in 1990 to 12,333 in 2011. Most of this increase was associated with children ages 0 to 4 years.

“The findings from our study show that the current voluntary standards for shopping cart safety are not adequate,” said Gary Smith, MD, DrPH, director of the Center for Injury Research and Policy at Nationwide Children’s Hospital. “Not only have the overall number of child injuries associated with shopping carts not decreased since implementation of the safety standards, but the number of concussions and closed head injuries is actually increasing. It is time we take action to protect our children by strengthening shopping cart safety standards with requirements that will more effectively prevent tip-overs and falls from shopping carts.”

Suggested design changes include improving performance standards for restraint systems and placing the child seating area near the floor. This latter design change would be safer, because it would reduce the risk of cart tip-over by lowering the center of gravity of the cart and decrease the risk of injury from falls because the child is much closer to the ground.

In addition to design changes, researchers noted that interventions designed to teach parents how to safely use shopping carts, store-wide broadcasts encouraging cart safety belt use, and having store employees encourage families to use the cart safety belts would also help reduce the number of shopping cart-related injuries.

“It is important for parents to understand that shopping carts can be a source of serious injury for their children,” explained Dr. Smith, also a professor of pediatrics at The Ohio State University College of Medicine. “However, they can reduce the risk of injury by taking a few simple steps of precaution, such as always using the shopping cart safety belts if their child needs to ride in the cart.”

The Hartford Agrees to Pay $650 Million in Boy Scouts Bankruptcy