Insured thunderstorm losses are much higher than they have ever been, and there is no sign that they will return to lower levels any time soon. Moreover, the current state of the insurance industry—from the focus on heavy marketing to standard replacement cost coverage on roofs—exacerbates these losses, creating a real “roof problem”.

In part 1, we described the depth of the roof problem and the structural difficulties within the insurance industry that make solving it both really hard and critically important. Part 2, detailed a four-step path that the most adept carriers have followed to solve the roof problem. And in this final part, we discuss the two types of problems that many carriers have seen with their roof problem solutions, as well as the current approaches to addressing these new problems in detail, highlighting key takeaways.

The Problem with the Solutions

The most insightful interviews we conducted identified two different categories of issues with the above strategies that threaten their viability as ways to solve the roof problem: ACV-specific problems and data validation problems.

The main concerns we heard about offering ACV coverage on the roof revolve around customer satisfaction and verifying roof repairs. The customer satisfaction issue—made more important due to the static nature of the homeowners’ insurance market—is that customers will not properly understand that they may have to pay significant amounts of money out of pocket to properly repair their roof after damage. Given the aging housing (and roof) stock in the U.S., a very likely scenario is that a customer will need $10,000 for a new roof, but will only get $4,000 from her carrier after depreciation and deductible. Most consumers may not know what “ACV” is, and some interviewees were concerned that insurance agents may not be explaining it properly to their customers.

The second concern we heard about ACV coverage was a concern that where the cost of a repaired roof significantly exceeded the loss payment, customers would “take the money and run” and leave the roof unrepaired—or partially repaired by an unlicensed contractor (“Uncle Bob”). This problem is made worse by the storm chasers, who will have even less incentive to do any significant repairs on the roof with a partial payment. There is a potential for ACV coverage on roofs to open carriers up to significant future risk by insuring roofs that are damaged, where future events may compromise the roof and significantly damage the rest of the structure and the contents. 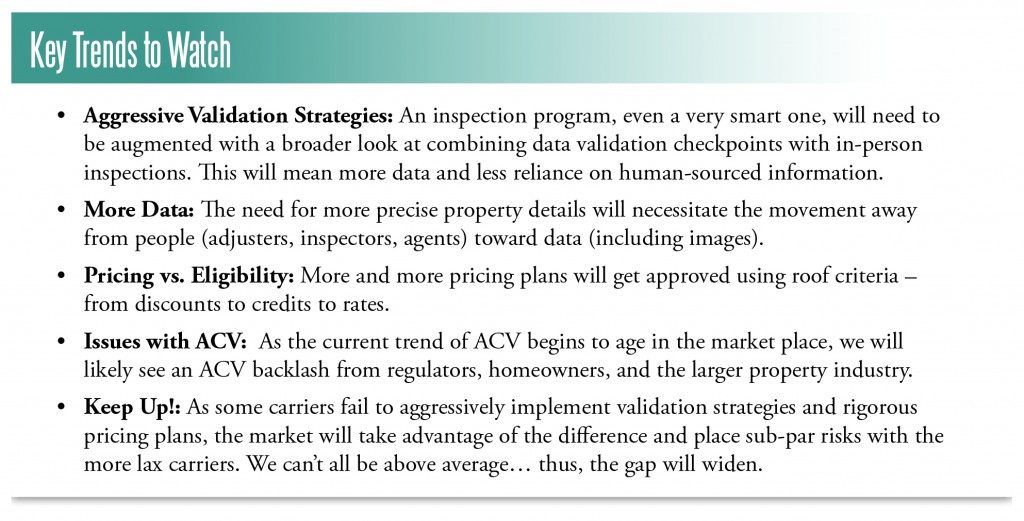 The other category of problems with the above solutions is data validation: When a carrier is underwriting and/or rating on roof characteristics, the underwriters need to be able to verify that a particular claimed roof characteristic is in fact the accurate roof characteristic. We heard from our interviews that 60 percent of Florida’s wind mitigation credits were unwarranted. This problem is compounded by the fact that homeowners do not provide reliably accurate information, and that agents are very good at figuring out which carriers are lax on validation and how to get questionable roofs through validation. For example, we heard from several agents who talked about which carriers “blocked” certain zip codes, certain ages of home and certain roof ages. This means that an underwriting policy that carriers put in place to address 90 percent of current roof problems may end up only addressing 30 percent of future problems as agents find that 10 percent hole and make it much bigger.

Key Takeaway: ACV is not a panacea and verifying that roof repairs are done properly is essential.

We heard about a variety of current and planned fixes to the ACV and validation problems mentioned above. The most agile carriers we spoke with saw the current and future of the roof problem as an iterative process, where the problems get smaller and smaller as carriers are able to target issues with more granularity and with better data.

On the ACV front, forward-leaning carriers are tackling potential customer satisfaction issues by focusing more on “soft skills” training for agents, inspectors, and adjusters. These soft skills are especially critical with the fine-grained and nuanced ACV determinations that are being made about the roof. Some carriers are also monitoring or validating repairs with inspections, imagery, and/or building permits in order to eliminate the “take the money and run” problem. And every carrier we spoke to that has been successful in beginning to solve the roof problem also emphasizes the importance of the claims department working closely with underwriting.