The maker of Hebrew National is standing by the kosher status of its hot dogs and other meats. 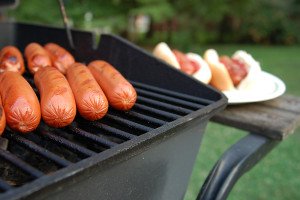 ConAgra Foods Inc. says a lawsuit that claims its products aren’t really kosher is without merit. The suit claims that ConAgra, based in Omaha, Neb., charges premium prices for Hebrew National meats, which it says aren’t really 100 percent kosher.

For example, the suit says that employees at a third-party kosher certifier for ConAgra complained of witnessing non-kosher procedures at meat plants.

The lawsuit alleges that the third-party certifier, AER Services Inc., did nothing to correct the problems and instead fired the employees or threatened to have them transferred.

The suit, which seeks class action status, was filed by Minneapolis-based law firm Blackwell Burke on behalf of 11 consumers.

The suit filed in U.S. District Court in Minnesota says that the fraudulent mislabeling of food as kosher has been a problem for years. It says ConAgra is aware of the value consumers put in seals and standards, such as the “Triangle K” on Hebrew National meats to represent that they are kosher.

In order for meat to be considered kosher, the animal the meat came from must be healthy and clean, meaning it can’t have dirty hides covered in mud, sand or stones, the suit notes.

The lawsuit says the animals used to make Hebrew National products do not meet those standards; unclean and unhealthy animals are often selected to be slaughtered for kosher meats, it says.

“Pressure is put on the employees inspecting and slaughtering the cows to maximize kosher meat production by slaughtering unclean cows,” the suit states.

ConAgra says in a statement that there is “close rabbinical supervision” of its food processing and packaging.