The California Highway Patrol and other statewide traffic safety groups have created a set of written guidelines on motorcycle “lane-splitting,” the at-times hair-splitting maneuver that allows riders to legally pass vehicles in adjacent lanes by driving between them.

While California is the only state in the country that allows lane-splitting, there had not been written guidelines on how to safely execute the polarizing practice that often pits motorcycles against cars and trucks, the Sacramento Bee reported.

The guidelines set by the groups including the CHP, the Department of Motor Vehicles and Office of Traffic Safety, say motorcyclists can ride between two cars if there is room, but only at speeds no more than 10 miles-per-hour faster than the vehicles they’re passing. The rules also say that motorcyclists should not attempt the move at full freeway speeds, or in any traffic going faster than 30 mph.

“There is a need to acknowledge lane-splitting is being done in California, and a need to help people understand what is reasonable,” California Highway Patrol Sgt. Mark Pope said. “Until now, no one in authority has said how to do it safely.”

“We are trying to get people to slow down,” Pope said. “A lot are traveling at 40 mph or faster. The faster you go, the harder it is to stop.” 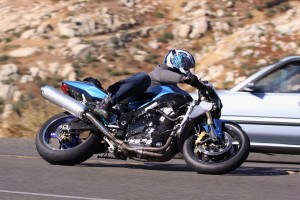 Pope said the guidelines do not reflect any changes in the policy. The CHP has long held that lane-splitting is a legal, common practice in California because nothing in the state Vehicle Code specifically prohibits it.

Pete terHorst, spokesman for the American Motorcyclist Association, said the new California guidelines could be used by motorcycle advocates in other states to push legalizing lane-splitting elsewhere. But terHorst said advocates nationally typically focus on other motorcycling issues, including broader concerns about causes of crashes.

“We essentially endorse the California position, but we don’t promote it in other states,” terHorst said.

Meanwhile, other states prohibit lane-splitting, such as Nevada, Oregon, Washington and Arizona, the newspaper states. Other states consider the practice unauthorized, according to the American Motorcyclist Association’s national cycling rules database.

But Gabe Ets-Hokin, editor of Oakland-based CityBike magazine, said while he appreciates the state’s attempt to make a statement about the practice, he worries it could be a first step toward more restrictions.

“Lane-splitting is a unique lifestyle to California motorcyclists, a subculture,” Ets-Hokin said. “If we can do it safely, what is the problem?”