For a while it seemed like the Interstate 30 and U.S. 167-U.S. 67 corridor was the place for tornadoes to touch down in Arkansas, but a National Weather Service survey shows twisters occurred in every county in the state over a 61-year period. 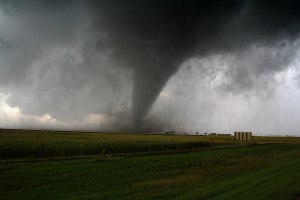 Each of Arkansas’ 75 counties has reported at least seven tornadoes from 1950 to 2011, the survey found.

“In the late 1990s, the tornadoes seemed to be concentrated along the (I-30 and U.S. 167/67) corridor,” John Robinson, the warning coordinator for the National Weather Service in North Little Rock, told the Arkansas Democrat-Gazette for Sunday’s editions. “But in other years, we’ve had them in north Arkansas or in south Arkansas.

“A lot has to do with what the weather patterns are and where the jet stream is,” he said. “They can happen anywhere.”

Some forecasters have predicted a volatile spring storm season this year because of La Nina, the cooling of the South Pacific Ocean. The weather phenomenon creates high pressure and warm air over much of the South, which made for a warmer, drier winter this year in Arkansas.

So far this year, tornadoes have killed at least 55 people, and the 80 tornadoes that struck Indiana, Kentucky and Ohio on March 3 set a record for the most twisters in a day.

“There’s not much doubt that we’d have a bad tornado season,” Robinson said. “We’ve had temperatures in the 80s in February. We’ve not seen weather like this in a while.

“This ensures we’ll see outbreaks of tornadoes in the early spring. We’ve already seen them.”

Seven tornadoes have been confirmed in Arkansas this year.

According to the study, the most tornadoes in the 61-year span occurred in three Arkansas counties connected by I-30 and U.S. 167/67: Pulaski County, with 84; White County, with 72; and Lonoke County with 70.

Northeast along the U.S. 67 corridor, Jackson County reported a 61-year total of 49 tornadoes, and Craighead County had 37.

“Terrain plays a part,” Robinson said. “You have the hills to the northwest and the flatlands to the southeast. The highways were built in between because that was the best location. Two-thirds of all tornadoes travel from southwest to northeast, so the highway corridor seems like a natural path.”

Lafayette County reported nine tornadoes between 1950 and 2001. Its neighbors Columbia and Miller counties had 30 and 23 tornadoes, respectively.

“The Red River seems to be a barrier,” Barnes said. “The tornadoes seem to die out when they get to the river. Then they pick back up at Columbia County. When they hit our county, they fizzle.”