The sharp reduction in personal auto claims that followed COVID-19 shutdown orders began to fade away after the Memorial Day weekend, but frequency appears to dropping again in reaction to a resurgence of the disease.

Andy Cohen, chief operating officer for Snapsheet, said claims frequency dropped by 40 to 50 percent after closure orders took hold, but auto claims ticked back up to a level about 20 to 25 percent below normal levels between Memorial Day and the July Fourth weekend.

“However claim frequency turned back around to early-June, late-May levels as California, Texas, Florida and Arizona case counts grew dramatically after the 4th,” Cohen said in an email. “Countrywide claim frequency in July vs. July 2019 is down about 30 percent.”

A decision by State Farm, the nation’s largest private auto insurer, to file for rate reductions averaging 11 percent nationwide shows that insurers are beginning to accept reduced claim frequency as the new normal — at least for the time being. In its rate filings, the carrier reported claim volumes from March 29 through May 2 were 26% to 56% lower than the first two weeks of March 2019, according to a report by S&P Market Intelligence.

“Companywide, claim volume is starting to increase as drivers return to the roads,” State Farm said in a June 3 memorandum attached to its Texas filing. “We anticipate claims volume will be lower than before COVID-19 but higher than current levels.”

The Keefe, Bruyette & Woods investment banking company said the reduction in auto claims is showing up in carriers’ bottom lines. A financial note by KBW analyst Meyer Shields said the personal auto loss ratio was 62.1 percent in June, compared to 72.1 percent in June 2019, and declined by double digit-percentage points four months in a row.

“Although there are some signs of plateauing driving (possibly related to rising infection rates in numerous states), overall mileage in July — and probably coming months — should stay well above April lows, particularly as seasonal driving patterns re-emerge,” Shields said.

A monthly Auto Claims Snapshot posted by CCC, a photo-estimate software provider, said that claims involving property damage were down 25.7 percent in June compared to the previous year. That was an increase from May, when damage claims were 35 percent below the prior year. 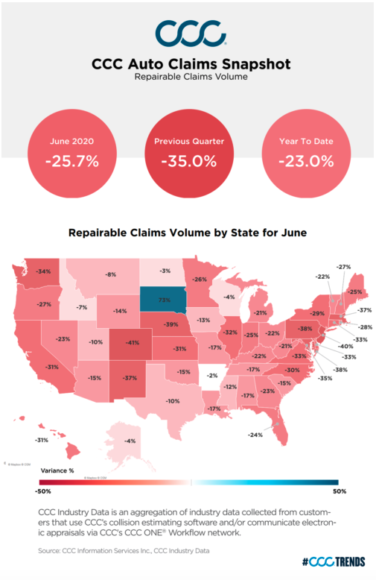 Claims were down in every state except South Dakota, which suffered a 73 percent increase due to severe hailstorms. June-to-June decreases ranged from 2 percent in Arkansas to 40 percent in New Jersey.

“As of early July, with the number of daily confirmed COVID-19 cases per 100K residents surging in states such Arizona, Florida, California and more, certain states are starting to see overall non-comprehensive appraisal counts trend down again,” CCC said in a report written by Bethany Suckrow. “How far they fall will likely depend on how extensive efforts to contain the virus become.”

The reduction in claims volume does not appear to have impacted all carriers equally.

Geico said average claim severity, on the other hand, increased 7 to 9 percent for property damage and collision and 4 to 6 percent for bodily injury coverage. Industry analysts have reported that motorists are suffering more serious crashes because of faster speeds due to uncrowded roads.

Farmers notified Texas regulators on May 1 that it will discount motorists’ premiums by 15 percent.

“The ultimate impact of the pandemic remains uncertain and this payment represents our best estimate of what we are seeing,” the carrier said. “Following the sharp reduction and miles driven and claim frequency in March, Farmers is now starting to see an increase in claim frequency which is why the May 1, 2020 reduction is less than the previously filed reduction in April 1, 2020 premiums.”

Cohen said whether driving levels, and hence claims, return to normal levels depends largely on whether schools return to normal schedules. He said the reduction in miles driven is largely driven by motorists in major metro areas. He said claims will remain suppressed if schools remain closed or open only for staggered schedules.

“As school systems move to virtual, partial and flex scheduling, parents are less likely to be commuting to an office at rush hour which may keep claim frequency suppressed for the rest of the year,” he said.

Sams is editor of the Claims Journal, which is part of the Wells Media Group. He can be reached at jsams@wellsmedia.com. More from Jim Sams