The government wants smartphone makers to lock out most apps when the phone is being used by someone driving a car. 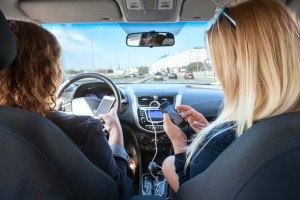 Drivers could still make calls but the phones and automaker systems would lock out the ability to enter text. Internet browsing, video not related to driving, text from books, and photos also would be locked out. Navigation systems would be permitted, but with guidelines on how to avoid driver distraction.

Fatal crashes caused by distracted drivers are on the rise, and that’s contributing to a spike in traffic deaths during the past two years. The government says 3,477, or about 10 percent, of the more than 35,000 traffic fatalities last year involved distracted drivers. That’s up 8.8 percent over 2014. Traffic deaths spiked 10.4 percent in the first six months of this year and rose 7.2 percent last year, after years of declines.

“With driver distraction one of the factors behind the rise of traffic fatalities, we are committed to working with the industry to ensure that mobile devices are designed to keep drivers’ eyes where they belong – on the road,” NHTSA Administrator Mark Rosekind said in a statement.

Automakers already are moving this direction, with many offering Apple CarPlay and Android Auto that pair smartphones to car touch screens and allow limited use of the phone apps. NHTSA wants phone makers to develop technology that can determine if someone is driving a car and then disable most of the apps. But at present, that technology doesn’t exist. In its absence, the agency wants phones to have a “driver mode” that would be activated by the smartphone user.

General Motors, for instance, has the Apple and Android pairing system in about 40 models worldwide. Already, it prevents use of many phone functions that could cause distraction, spokesman Vijay Iyer said. The system, he said, won’t let drivers type a text message, but it does allow text by voice. “The fundamental direction is to keep your hands on the wheel, eyes on the road and minimize distraction and offer up other means of interaction, primarily voice,” he said.

NHTSA will take public comment for 60 days before deciding whether to put the guidelines in place. Unlike a federal government rule, auto and cellphone makers don’t have to obey the guidelines.