Americans with Disabilities Act (ADA) Title III lawsuits are up 63 percent over 2015, according to law firm Seyfarth Shaw.

ADA Title III prohibits businesses open to the public from discriminating on the basis of disability. The Act applies to a variety of businesses and restaurants, including warehouses, movie theaters, schools, office buildings, day care facilities, doctors’ offices and any new construction of same must comply with the ADA construction standards.

According to Minh Vu, partner and ADA Title III leader at Seyfarth Shaw, the fact that more attorneys are getting into this line of business can be attributed to the rise in ADA suits.

The firm states that the number of suits filed in federal court may top more than 7000, noting that more lawsuits were filed in the first half of this year than in all of 2013.

“More lawyers are finding out that this is a very…lucrative practice,” said Vu.

The ADA only applies to persons who fall under the definition of having a disability, such as:

In 2013, the most complaints were filed in California, Florida and New York but other states may be catching up. An April Forbes article by Stephanie Grimoldby focused on Chicago, Ill., businesses increasingly being targeted by ADA lawsuits. She explained the increase may be due to new ADA Accessibility Guidelines that went into effect in 2012. Phoenix, Ariz., businesses were also noted to be increasingly targeted according to a July article by Maria Polletta of The Republic/azcentral.com. 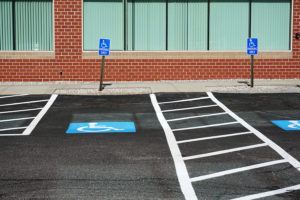 Under Title III of the ADA, a plaintiff doesn’t get damages, but is entitled to attorneys’ fees and costs and injunctive relief.

According to Vu, the vast majority of cases settle for $15,000 or less. It’s a business decision, said Vu, indicating it would cost three times as much to file a motion to dismiss.

“If a client gets sued because, for example, they have a parking deficiency, they don’t have enough disabled parking spaces for their facility or the parking spaces are accessibly sloped, what will happen is the client will go out and fix it and try to negotiate a settlement because the cost of the litigation is typically much greater than what they can do in terms of settling the case,” Dennington explained.

“A lot of plaintiffs sue under the Unruh Act,” said Dennington. “Construction-related defect claims, there’s some ability if you get your property inspected by a certified access specialist and make the corrections…They’re very complicated rules, but there’s some way to lessen the maximum damage, or the $4,000 damage, to a $1,000 offense if you get it corrected within I believe it’s 120 days.

There has been litigation on what “per offense” actually means, said Dennington.

“If you have, for example, a parking space that isn’t compliant, what if the plaintiff comes back every day for the next year? Is that 365 offenses, or at some point are you limited by due process considerations in terms of how much you can actually recover for penalties? What is clear under the statutes is that it’s per occasion, per visit to the facility. There may be multiple violations at a particular facility. You don’t get to tack on $4,000 for each different violation for the same facility, if that makes sense,” Dennington said. “The counters may be too low or too high. There may be a parking issue. There may be no insulation on the pipes under the bathroom counters. You don’t get $4,000 for each one of those. It’s just $4,000 per time you patronize the facility.”

The fact that most people file under the Unruh Act, is because of the $4,000 damage opportunity, Dennington explained. Plaintiffs can’t sue under both statutes, it’s one or the other.

“Sometimes they just do the Unruh Act. I’ve had some plaintiffs that just filed under the California Disabled Persons Act. For facilities issues, that’s a term of art, “construction-related access claims,” then there is the ability to get the $4,000 lessened to the $1,000 per offense, if you get those things corrected and get it signed off by a certified access specialist,” Dennington said.

Because of specialized California legislation, businesses have an opportunity to fix a problem alleged in an ADA suit.

“There was a new law put into place this year that is called Senate Bill 269. It provides some relief to small businesses. If you’re a business that has 25 or fewer employees, there are a number of listed technical violations that, if you correct within 15 days of being on notice of those violations, then you’re not going to be subject to the statutory penalties,” Dennington said. “It’s a rebuttable presumption, but the presumption is that it didn’t cause any damage, basically, to the plaintiff.”

According to Dennington, parking is targeted frequently in ADA suits.

“I’ve been doing it for several years now, and throughout the time I’ve been doing ADA work, more of my cases have parking issues than don’t. That’s a big component of the claims,” Dennington said. “I think the reason is that’s something that you can see just from driving by, without having to go inside. It’s easy to see where somebody’s stall is not wide…or something like that. That’s a big red flag. Parking is a big issue in terms of what they call construction-related access claims. There are many different types of Title III, Title II, and Title I claims, but in terms of the facilities that are inaccessible, parking’s a major component of most claims.”

According to Vu, shopping centers, retailers, hotels and restaurants tend to be targeted the most.

Vu said there isn’t much a business can do to avoid these types of suits. She said a barrier can be a sink too low, a toilet seat that is not high enough or a toilet paper roll holder might be off by an inch.

“There are a number of different firms. There’s the California…I think it’s a non-profit organization. It may have, at one time, been an actual agency. I forgot the name of it. California Disabled Rights Center, or something like that. They’re statewide. They’re non-profit. I think they take these things on pro bono,” said Dennington. “Then there are the firms like Potter Handy…they’re private. I think they call themselves the Center for Disability Access. Ray Ballister is one of the attorneys, and Mark Potter is another one. They file a number of these lawsuits.”

Though non-profit agencies take the cases pro bono, they do get attorney’s fees.

“I’m not sure there’s much that will deter the kind of repeat plaintiff that are driving these numbers,” said Vu.

Though modern buildings are more likely to be ADA compliant, Dennington said it is unlikely that lawsuit volume will go down any time soon.

“You have an unlimited possibility of existing buildings and sites that were constructed prior to 1991. They’re considered existing buildings that may not be compliant. There’s the potential for claims against them to go on,” Dennington said. “For newer facilities and newer construction, the architects and the engineers that design new facilities, that’s one of the big criteria they use is the ADA and the accessibility standards, so you’re not going to see violations of the accessibility standards in newer facilities like you might in a facility that was built before there was even an ADA.”

Businesses can make themselves a less attractive target by taking care of the items that are most visible. Vu suggested businesses make sure that accessible parking is properly striped and has proper signage, sales and service counters should have a lower accessible counter and aisles should be kept clear – there needs to be 36 inches of space for wheelchairs to maneuver.

Another new trend are suits alleging that business’ websites are not compliant with ADA Title III, Dennington said.

“I can tell you a real hot issue in Title III that has not been resolved. It’s probably going to have to be resolved by the United States Supreme Court. That is websites. Whether websites, online shopping like Amazon, CNN, just viewing a website, whether that is a public accommodation within the meaning of Title III,” Dennington explained.

There’s been a split among the circuit courts, he said.

Sometimes allegations may be intertwined with a negligence or personal injury claim, but Vu said most Title III claims aren’t covered by insurance because the damages component isn’t covered.

Some Employment Practices Liability insurance policies may cover defense costs related to ADA lawsuits. According to a July 2015 blog by insurance brokerage The Leavitt Group, EPLI policies generally cover claims related to the requirements of the ADA.

According to General Insurance Services, an insurance agency serving Northwest Indiana, determining coverage may require careful review of the policy, “Many policies define a claim as a demand for monetary damages. This definition can present a problem in an ADA claim, because many of these claims are asking for reasonable accommodations, not monetary awards. That’s why it is important to ensure that your policy’s definition of a claim includes claims for non-monetary damages. A policy with this expanded definition will cover defense costs and indemnity connected with an ADA claim, but will not provide the funds to bring your organization into compliance with the provisions of the law.”