With an extended heat wave gripping the nation, employers and workers are being reminded of the hazards associated with working in the heat. According to the National Oceanic and Atmospheric Administration (NOAA), high temperatures and increased humidity will continue throughout the week, especially in the Southeast. The Southwest will continue to experience hot and dry conditions through Friday.

NOAA reported that June marked the fourteenth consecutive month of record heat around the globe. In 2014, the Occupational Safety and Health Administration (OSHA) reported 2,630 workers suffered heat illness and 18 died from heat stroke while on the job.

According to OSHA, as the outdoor temperature exceeds a worker’s normal body temperature, it becomes harder to cool down. The agency notes that sweating is only effective if the humidity is low enough to allow the evaporation of perspiration. In addition, the fluid and salt lost during sweating has to be replenished.

If a worker can’t cool down, heat is stored and the body core temperature rises. In addition, the agency warns the worker’s heart rate will increase, concentration and focus will become increasingly difficult and the worker may become irritable or feel ill. Fainting and death as a result of heat stroke is a possibility if the worker isn’t cooled down.

In addition, the agency says that a worker exposed to excessive heat regularly is at risk for a number of heat-related illnesses, including “heat rash and heat cramps to heat exhaustion and heat stroke.” Exposure to heat can also increase the risk of injuries because of sweaty palms, fogged-up safety glasses, dizziness and burns from hot surfaces or steam.

On June 27, OSHA hosted a Heat Advisory Call to educate employers and the public on what can be done to protect workers from a heat-related illness.

“Heat can kill. And it is especially tragic when someone dies of heat exposure because they’re simply doing their job,” explained Dr. David Michaels, assistant secretary of Labor for Occupational Safety and Health. “We see cases like this every year and every one of them is preventable. Last summer these included a tree care worker in Virginia, a landscaper in Kentucky, a temporary worker on his first day collecting garbage in Texas.”

Just this year, the heat has been blamed for the death of a landscaper in southeastern Missouri. Officials reported that the heat index reached nearly 110 degrees and that his core body temperature was 108 before he died. He had been on the job just four days for the tree trimming company, according to OSHA.

Earlier this week, the city Alexandria, Va., suspended yard waste pickup due to the excessive heat.

“Fatalities are the most extreme outcome of heat exposure and they most often occur to workers who have been on the job a few days or less. Many more workers become dangerously ill from heat. Last summer OSHA received reports of more than 200 workers hospitalized with heat illness. And we know that is in undercount of the actual number,” Dr. Michaels said.

During this latest heat wave, Dr. Michaels reported that his agency received a record number of questions regarding heat and worker rights. This year, the agency has reportedly already investigated several worker fatalities that may be heat-related. 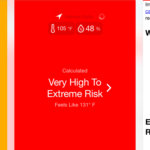 OSHA has updated a heat safety tool smartphone app for employers and workers to easily identify when conditions become dangerous. The program uses National Weather Service data to calculate the heat index at the workers’ location and advises when the risk level is high. The app, available in English and Spanish, also provides tips on preventing heat illness and how to identify symptoms. According to the agency, the app has already been downloaded more than 250,000 times.