Teenagers calling themselves safe motorists overwhelmingly admit to checking phones when behind the wheel, and those who text while driving say they are often distracted by parents who expect immediate responses, a survey found.

More than half of the teens confessed to texting while driving to update their parents, and 19 percent said moms and dads expected a response within one minute, according to a study issued Tuesday by Boston-based Liberty Mutual Holding Co. and Students Against Destructive Decisions.

“We have a generation of parents that are used to being very connected with their children,” Stephen Wallace, chief executive officer of SADD, said in an interview. “They’re looking for that constant communication.” 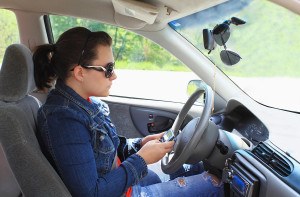 Of the almost 3,000 fatal crashes in 2013 caused by distracted drivers, 10 percent of those deaths were teens, according to the U.S. Department of Transportation. Auto insurers including Allstate Corp. and State Farm Mutual Automobile Insurance Co. have publicized the risks of distracted motorists.

“My mom has done that before where she doesn’t know I’m in the car, but she’ll be texting, and be like, ‘Why aren’t you answering right away?,’” Rachel Hare, 24, of Atlanta, said in an interview. “She freaks out.”

Nearly half of teens surveyed said they check cell-phone applications while driving, with Snapchat and Instagram being the most popular. About 88 percent of teens who consider themselves safe drivers report using phone apps on the road.

“It’s not that distracting when you’re at a red light, and you just quickly toss a message,” 24-year-old Ryan Tabula, a Canadian tourist visiting New York, said in an interview.

More than a third of teens reported to texting behind the wheel to coordinate hang-outs. Hare said that she often texts in the car to give updates to people she plans to meet.

Young drivers have “pressures of being always connected and always on, as a lifestyle,” William Horrey, principal research scientist at the Liberty Mutual Research Institute for Safety, said in an interview. “This leads to dangerous behaviors and dangerous decisions behind the wheel.”

Liberty Mutual, the second-largest property-casualty insurer in the U.S., conducted the survey of 1,622 11th and 12th graders across the country with SADD, a national youth education and activism organization.