We’ve all seen distracted drivers on the road, but the latest poll from PEMCO Insurance sheds light on another dangerous distraction – oblivious pedestrians who are more focused on their phones than their potentially hazardous surroundings.

To no surprise, the vast majority of those who witness distracted pedestrians blame handheld technology. Most see pedestrians who are chatting on the phone, reading or sending messages, or using earbuds or headphones.

But among these same respondents, few admit to being distracted by their phone. According to the poll, most – nearly half of all respondents – say that when they’re distracted, it’s because they’re talking to a fellow pedestrian.

“We’ve all seen this behavior. Just drive through the intersections around PEMCO at lunch time, and chances are you’ll see a fair share of professionals focused on something other than crossing the street,” said Jon Osterberg, PEMCO spokesperson. “Whether they’re distracted by a phone call or they’re in a conversation with another pedestrian, there’s still risk of getting hit because of inattention.”

Younger respondents, people under age 35, are among those most likely to fess up to being a distracted pedestrian. Nearly half of young people polled in Washington and Oregon say they’re sometimes or even often distracted, and many attribute it to multitasking with their handheld devices.

Older drivers tend to notice technology distractions, as well. Nearly nine out of 10 drivers age 55 and older say they see pedestrians, regardless of age, distracted by talking on their cell phone, reading or texting from it, or listening to headphones.

“This is more than an age-related issue, and perhaps it’s the ‘other guy’ mentality. Regardless, pedestrians are vulnerable to collisions. And personal-safety experts say that pedestrians also are especially vulnerable to criminal assault when they’re distracted,” added Osterberg. 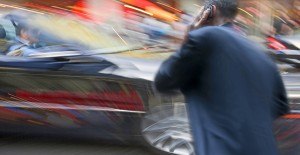 According to data from the National Highway Traffic Safety Administration, in 2012 a pedestrian was injured every 7 minutes in the United States. Worse, 4,743 pedestrian fatalities nationwide in 2012 represented a 6 percent increase over the previous year and marked the most fatalities in the past five years.

“A mounting number of studies show a clear correlation between distracted pedestrians and unsafe behavior while crossing intersections,” Osterberg said. “Just as it is with driving, distractions of any kind can lead to accidents.”

According to a University of Washington study published in Injury Prevention, texting pedestrians were 3.9 times more likely to display at least one unsafe behavior – disobeying the lights, crossing mid-intersection, or failing to look both ways. Those who were texting also took more time to cross the street.

Interestingly, those listening to headphones walked faster than undistracted pedestrians.

To learn more about the PEMCO Insurance Northwest Poll and to view a summary of the results, visit www.pemco.com/poll, where the public is invited to participate in an informal version of the poll and see how their own responses compare with those collected by FBK Research of Seattle in May 2014.

About the poll
PEMCO Insurance commissioned this independent survey that asked Washington and Oregon residents several questions about driving habits and attitudes toward current Northwest issues. The sample size, 600 respondents in Washington and 600 respondents in Oregon, yields an accuracy of +/- 4.1 percent at the 95 percent confidence level. In other words, if this study were conducted 100 times, in 95 instances the data will not vary by more than the associated error range.