Overall satisfaction among small business customers is 783 on a 1,000-point scale in 2014, up 6 points from 2013. Companies that write the majority of their business in personal lines of insurance, such as Allstate and State Farm, have an average overall satisfaction score of 804. In contrast, satisfaction with insurers that focus more broadly on writing commercial insurance, such as CNA Insurance and Zurich, averages 766. All six insurance providers that rank above industry average in 2014 are primarily personal line providers, and personal lines providers score higher than commercial-focused providers across all five factors.

“While both groups show year-over-year improvement, insurers that predominantly write personal lines insurance benefit from the personal relationships they are better able to build with their small-business customers,” said Jeremy Bowler, senior director of the insurance practice at J.D. Power. “The relationship is typically established early because small-business owners often purchase commercial insurance from the same agent that provides their home and auto insurance. Additionally, the agent is often local, so they have more personal contact with their customers and better understand their business.”

The study finds that 41 percent of customers of predominantly personal lines insurers first had their personal insurance with the insurer and added their commercial lines later. This occurs much less frequently among customers of more commercial insurers (12%).

All insurers benefit from providing a highly satisfying customer experience with increased customer loyalty and advocacy. Among “delighted” customers (overall satisfaction scores of 900 or higher) of personal lines-focused insurers, 79 percent say they “definitely will” renew their policy with their current provider, and 81 percent say they “definitely will” recommend their provider to family and friends. Among “delighted” customers of primarily commercial providers, 70 percent indicate they intend to renew and 72 percent provide recommendations.

Erie Insurance ranks highest among small-business commercial insurers for a second consecutive year, with a score of 813. Erie Insurance performs particularly well in the policy offerings and billing and payment factors. Nationwide and State Farm rank second in a tie (809 each). Nationwide performs particularly well in interaction and price, while State Farm performs well in policy offerings and billing and payment.

The 2014 U.S. Small Business Commercial Insurance Study is based on 3,525 responses from insurance decision-makers in businesses with 50 or fewer employees that purchase general liability and/or property insurance. The study was fielded from April 2014 through June 2014. 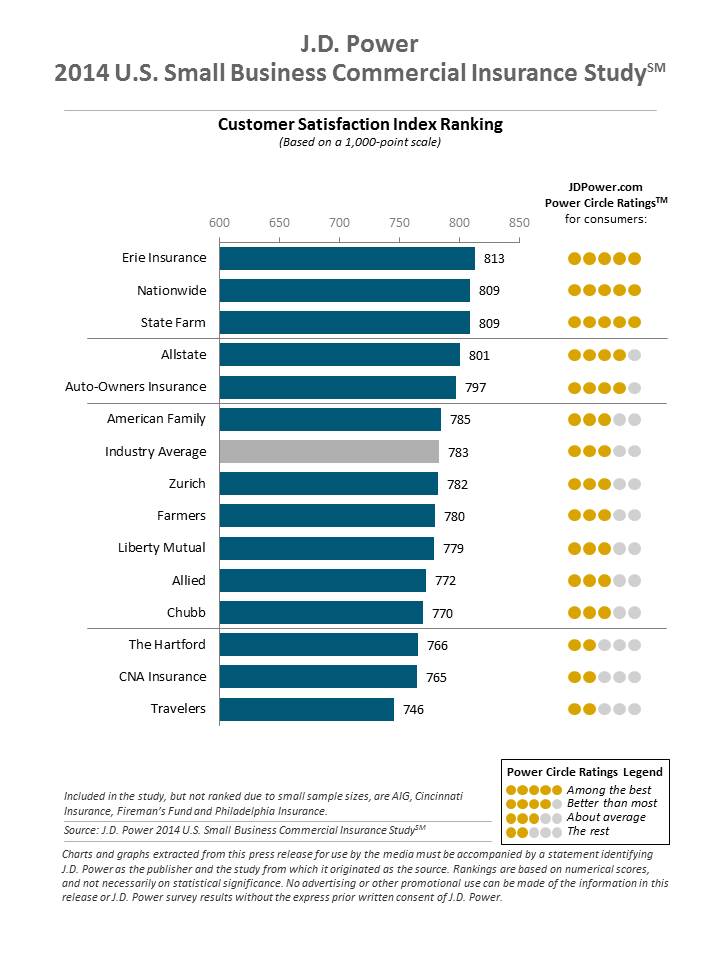