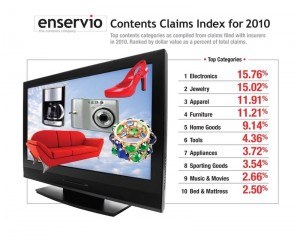 Electronics, jewelry, furniture, apparel, and home goods are among the top five items claimed, according to the findings of the Contents Claim Index (CCI) released by Enservio, a web based software and services provider for property contents claims processing.

“Enservio interprets the numbers and draws conclusions about what it comprises. The results reflect economic and consumer trends,” says marketing director Robert Halpern.

Noticeable trends in 2010 include:

• Bicycles and golf clubs are the most commonly stolen items

• Books and magazine claims are more prevalent in the East

• Tool claims are more prevalent in the Midwest

• Jewelry claims are more prevalent in the West

Halpern has some theories about the higher prevalence of tool claims in the Midwest.

“You think about all of the light to medium industry that takes place in the Midwest. It’s not surprising to see all kinds of tools claimed,” he says. “People have the land to have big factories. A lot of homeowners have automobile oriented hobbies, so you get these big sets of socket wrenches that people have in their garages and so forth.”

Halpern says there is a definite correlation between how the economy is doing and the types and frequency of contents claims seen by insurers.

Jewelry is a big theft target, with a slightly higher prevalence of theft on the West Coast than there is elsewhere in the country, according to Halpern. Rings, watches and necklaces top the list of items claimed.”For better or worse, jewelry claims are a somewhat convenient funding mechanism,” he says. “In the backside of a bad economy the claims generally don’t have to be substantiated as long as the item is not scheduled. So we see jewelry claims increasing in the aftermath of poor economies.”

Electronics continue to lead in property content claims, topping the list at 15.76 percent. Within the subcategories, claims for televisions (23.70 percent) and laptop computers (16.81 percent) dominate the electronics category.

“As electronics mainstream and as flat screen TVs become more popular, as there are more and more generations of iPads coming out, the cost of the electronics goes down, and so in general you’d expect to see that electronics as a category coming down as well,” says the Enservio executive.

“But the reality is that people are acquiring more and more electronics as time goes on, and it’s also fairly common for households to have more than one computer these days, and people rely on their electronics more than they ever have.”

The results also provide insight into what insurers could be doing to improve their bottom lines.

“For example, Enservio sees higher end sport bicycles that vastly exceed the value of scheduled pieces of jewelry, and it’s relatively easy to ride off with a bike out of somebody’s open garage than it is to get inside their house and steal a diamond,” he says.

One big surprise in the CCI findings was that storage boxes make up a substantial part of home goods claims, particularly in fire losses.

“You wouldn’t necessarily think of that [storage boxes] as being something that people are spending money on,” he says.