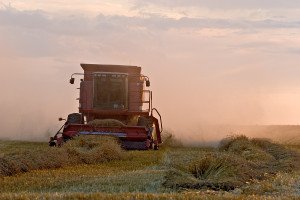 Harvest is a nerve-wracking ordeal for Tama County farmers.

Operating a combine in cornfields this fall is a lot like driving in a blizzard. Farmers are on the edge of their seat, hands tightly clenched around the steering wheel and often struggling to find where they need to go.

Plus, producers are playing a not-so-fun game of hide-and-seek. Debris is strewn throughout corn and soybean fields, just waiting to pop tires or destroy the innards of quarter-million-dollar combines if farmers don’t spot them first.

A storm called a derecho with winds up to 130 mph ravaged Tama and neighboring counties on July 11. It flattened cornfields and destroyed hundreds of buildings and grain bins, leaving a trail of destruction.

Farmers are still dealing with the aftermath.

“I’m absolutely getting nothing. Did you see a row there? I didn’t,” David Crees said while combining corn on the northern edge of Dysart.

As corn recovered from the storm, it took on a “gooseneck” shape. Large portions of fields are so tangled that finding rows are impossible.

Ease of navigation is hit and miss. Harvest is tedious.

His eyes glued straight ahead, Crees often stops and backs up to get corn he missed. The objective is to harvest as much as possible, but not at the expense of danger lurking below.

“I don’t want to be so intense that I put my neighbor’s shed through my corn head,” Crees said. “You get so into watching, trying to stay on the row.”

Just on the south side of Dysart, one of the hardest hit communities, Wade Wilson combined soybeans. Once or twice each round, he stops to pull metal or boards will nails and screws from bean rows.

Boards are like a chameleons, blending in with the dark brown plants. Farmers combine at about half-speed, 2 to 3 mph, as a precaution.

“You just have to be on the ball. You don’t know what’s coming up,” Wilson said.

Every now and then Wilson’s 2004 John Deere 9650 STS combine gobbles up a piece of debris, followed by an eerie crunch and vibration. Luckily, no major damage has occurred – yet.

Wilson knows that’s a possibility. A few cycle sections and knife guards have shattered. He carries extras for in-field fixes.

While picking up debris, Wilson has got six flat tires.

On the bright side, soybean production is good. Wilson said the first 350 of 1,000 acres is averaging 55 to 60 bushels per acre.

“When it’s all said and done, I’m tickled to death they’re yielding good and the machinery is (working),” Wilson said.

The same can’t be said about corn yields in the area. Reproduction and development setbacks because of the storm curtailed production by 20 percent to 30 percent, ag experts say.

Losses will be substantial, but not bad enough – for the most part – to trigger insurance payments, Crees said. That makes getting every ear possible in the combine even more critical.

“I’m losing ears and kernels. I know that,” he said.

Recently, the field averaged 170 bushels per acre instead of the usual 220.

“I thought we’d have our best crop ever until that morning,” Crees said. “We’ll just take things slow and do the best we can.”