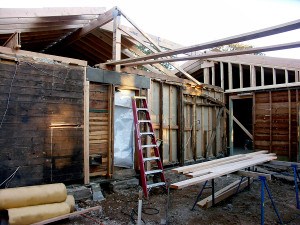 A Connecticut contractor who helped build a house on the ABC reality TV show “Extreme Makeover: Home Edition” has been accused of burning down his wood pellet business and charged with arson and other crimes.

Bruce “Bruno” Hayn was arrested by Norwich police Monday. The 54-year-old from nearby Colchester also is charged with attempted arson, insurance fraud and giving a false statement.

Authorities say the charges stem from an October fire that caused extensive damage at Shur Fire Energy in Norwich, 40 miles southeast of Hartford.

Hayn hasn’t returned a message left at his home. It’s unclear if he has a lawyer.

Hayn helped lead volunteers who built a family a home in Voluntown in December 2008 after two family members drowned in a pond and their home was damaged by fire.