The claim frequency in private passenger auto insurance has been declining steadily over the past decade — a trend linked to a number of factors including a rise in the number of aging drivers, graduated teen licensing and crash avoidance technology.

The fact that the baby boomer generation is the largest driving population in the United States is a key factor in reduced accident frequency, agrees Greg Horn, vice president of Business Analytics, at San Diego-based Mitchell International.

“What we’re starting to see is the baby boomers are starting to retire, their miles driven are going down, they may be consolidating to one car and they’re in that good driving period still,” said Horn. “We have a few years before the majority of baby boomers will get into what we call the ‘blue hair accidents’ where they back up into the pole that wasn’t there when they pulled in.”

In addition to the many safe older drivers getting into fewer accidents, teens are less prone to crashes now also thanks to graduated drivers licensing programs.

“There’s graduated driver’s licensing in various states, which is having a positive impact. So lower claims for teenagers and new drivers than had been in the past. We’re in a good situation,” Horn said.

Gotsch sees the positive trend continuing as technology steps up where aging baby boomers could get into trouble.

“Long term, as the baby boomer population ages, hopefully they will get those backup cameras, the backup warning systems, auto-braking systems in their vehicles, because they don’t appear to be wanting to give up their driving rights. They’re going to have to have a little bit of assistance as they go forward.”

While safer driving has helped, the recession has been another factor in reducing crashes, CCC’s Gotsch said.

“The recession, where we had about 22 million fewer new vehicles entering the mainstream. That, in general, helped reduce the average number of cars per household, and fewer cars on the road, less accidents,” said Gotsch.

While auto claims frequency is down, average auto injury claims costs have increased since 2005, according to the Insurance Research Council’s Trends in Auto Injury Claims 2011 edition. This is despite a decrease in serious auto-related injuries. The report noted that fewer auto injury claimants required hospitalization, days off from work or restricted activity. 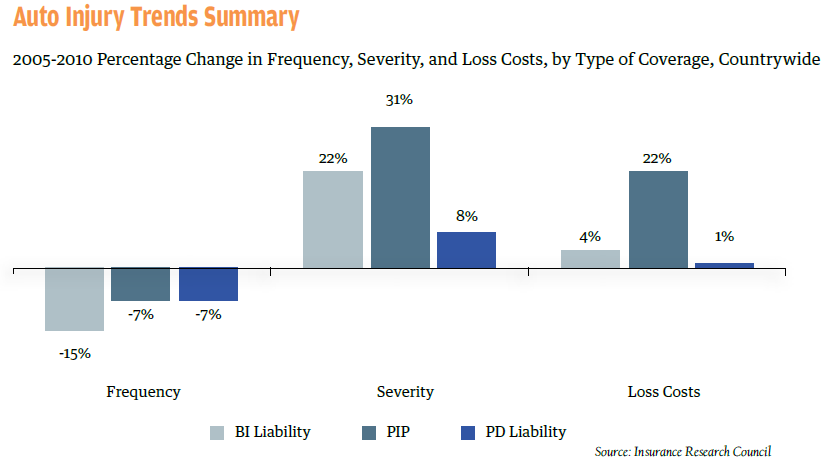 The report stated that bodily injury claims and personal injury protection costs per insured vehicle increased 4 and 22 percent between 2005 and 2010. This was mostly due to rising medical costs.

Auto insurance laws can have an impact on claim outcomes, according to the IRC report. No fault states tended to have low bodily injury claim frequencies along with higher bodily injury claim severities because the tort thresholds screen out less serious and expensive injuries. This raises the cost of the average claim.

The CCC report found that approximately 9 percent of all vehicles that had an appraisal written in 2000 were flagged as a total loss; by 2013, the figure had increased to 14 percent.

The volume share of vehicles aged seven years or more grew from 32 percent in 2004 to 46 percent in 2013 — which Gotsch pegged as a primary factor driving up total loss frequency overall.

Weather is a factor in comprehensive coverage losses.

“We see a lot of hail losses or wind damage, trees falling on cars. Comp losses have really been driving a lot of the volatility from a frequency perspective because the weather patterns are becoming more severe,” Gotsch said.

“Actually, this year we’ve had a fairly mild hail season. 2012 was one of the hardest hit, and you’ll actually see that in our numbers,” Horn said.

“The second quarter of 2012 was one of the highest average paid severities because there was very heavy hail across the U.S. and Canada,” Horn said.

Auto claim frequency is expected to decline during the next 25 to 35 years as a result of crash avoidance systems and self-driving vehicles. As more new vehicles are sold, many will likely include crash avoidance technology, however, the caveat, according to the CCC report, is that they will be traveling alongside an older fleet, in which vehicles are not equipped with the same type of technology.

“Of the numerous factors that have helped drive frequency down over the last 20 years the adoption of these systems has the likelihood of a sharper impact,” the report notes about crash avoidance technology.

“We believe that we’ve seen some very minor impact on additional reduction of frequency from those systems to date,” Gotsch said. “If you take that number out 10, 15, 20 years, it looks like you’re getting in the neighborhood of about 8 to 10 percent overall additional reduction in frequency by 2040, but that’s quite a ways out.”

Mitchell International predicts it will take about 15 years before most cars on the road will have this type of technology.

“We project that it’s probably going to be about 15 years before vehicles with collision avoidance warning systems will become the majority of vehicles on the road today,” said Horn. “Absent any government mandate like they just announced in the European Union that all cars are required to have autonomous braking by 2016, it will take about 15 years plus for the car park to be majority equipped with accident avoidance systems that will make an impact on claims frequency.”

According Gotsch, the impact of driverless cars is much further off. 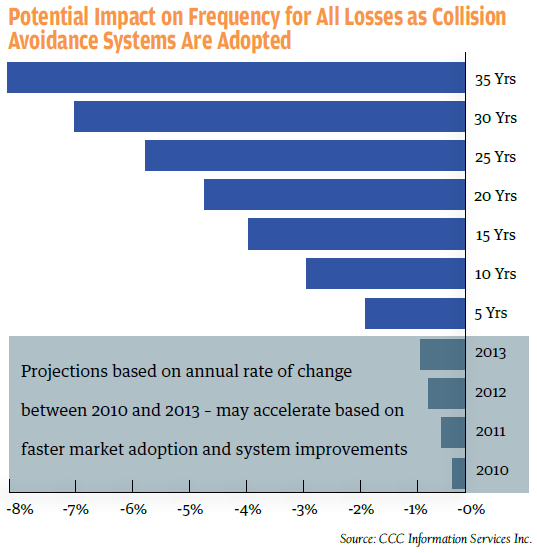 “What will happen, is the overall marketplace, from a crash avoidance perspective, will definitely benefit, because those technologies will continue to advance and will help the driver. But the point at which the driver gives up complete control, we’re quite some time off,” Gotsch said.

Regardless of when crash avoidance technology or driverless cars dominate on the roads, adjusters shouldn’t worry about their jobs.

“The one good thing is if you look at somebody in the body shop business or in the insurance claims business, claims are not going to go away overnight,” Gotsch said.

The Pandemic Has Started Weakening the World’s Weather Forecasts

Walmart Amps Up Its Virus Response for Workers