Signs activated by radar and equipped with red flashing lights to warn drivers going the wrong direction are slated to be installed at some highway exit ramps in Las Vegas.

The Nevada Department of Transportation is planning to place the experimental signs at Interstate 15 and Starr Avenue in southern Las Vegas, the location of a new highway interchange expected to open in mid-2019, the Las Vegas Review-Journal reported Sunday. 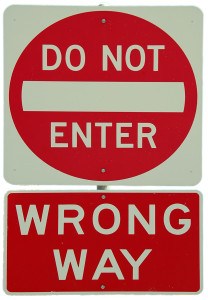 The signs are also planned for an interchange at Kyle Canyon Road and U.S. Highway 95 that’s expected to open in northwest Las Vegas in late 2019.

The signs’ radar system will detect a vehicle entering the highway through the wrong direction and activate the warning lights. If the flashing beacons don’t stop a wrong-way driver, a camera will immediately send an image of the vehicle to the regional traffic control center where workers can dispatch state police.

The signs are part of an attempt to reduce wrong-way driving, which caused 279 crashes that resulted in 41 deaths statewide from 2005-15, department spokesman Tony Illia said.

Wrong-way drivers are most often people impaired by drugs or alcohol, elderly residents or tourists unfamiliar with the traffic signs, said Jason Buratczuk, a Nevada Highway Patrol trooper. Most of these drivers turnaround once they realize the mistake, but the people who don’t self-correct can cause head-on collisions, he said.

“You find a majority of wrong-way drivers during the overnight hours when it does happen, and we have to react quickly to avoid a disaster on the roadway,” Buratczuk said. “Like anything that’s going to promote safety on the roadways, we certainly wouldn’t be opposed to something like this going on the freeway.”