It’s a nightmare that unfolds unpredictably, in a split second.

A car emerges from the blackness heading the wrong way along an unlit divided highway.

It shouldn’t be there.

Behind the wheel is a driver like John R. Fretts of Morris, Conn., whose Hyundai Elantra barreled north in the southbound lane of Route 8 on the night of Aug. 22 until he struck 29-year-old David Dziadik head on near Exit 37, killing him instantly, police said.

This was the latest wrong-way crash on Route 8, which has seen at least three fatal accidents in 10 years because of wrong-way drivers, but similar accidents for the same reason have been reported statewide for years. Over the next year or so, the state Department of Transportation plans to replace the six, staggered reflective signs along exit ramps with bigger, more reflective signs positioned just above snowbank level.

All of the new “Do Not Enter,” “Wrong Way” and “One Way” signs are larger and more reflective, and have reflective posts. 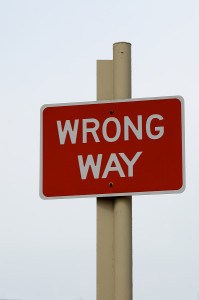 “They will be as in your face as they can be,” said Kevin Nursick, Department of Transportation spokesman. The transportation agency is working with the state police to identify locations with “abnormally high” incidence of wrong way drivers, but all of the ramps will have new signs through $5.5 million in Federal Highway Safety Improvement funding. Eight of the newer signs will replace six smaller ones. The goal, Nursick said, is specifically to keep drivers from entering an exit ramp.

“We are not an enforcement agency,” Nursick said. “But it might make a difference in saving lives. It’s still a fundamental driver error issue. That message still needs to be reinforced.”

The signs will be a high-profile attempt to gain attention. They don’t address the cause of what police say is behind nearly all of the wrong-way cases reported statewide: Drunk drivers.

A National Traffic Safety Board review in 2011 found that most wrong-way driver crashes nationwide, including a chain-reaction, deadly crash that year in Colorado, involved alcohol or drug use.

Facing a wrong way driver is a particularly terrifying experience.

On the night of June 28, 2008, Meriden police officer Jeremiah Scully, then a Naugatuck police captain, was heading home from a private duty job in a cruiser when he swerved to avoid a dark car without headlights that came at him as he headed north on Route 8.

Arthur Antunes didn’t see the same car as it reached him near exits 28 and 29, but he saw his friend’s car swerve in front of him as they both drove home from a fishing trip to Milford.

“It was like a nightmare,” he said at the time. “The car was coming so fast.”

The father of two suffered severe internal and leg injuries and screamed in pain as firefighters worked to extricate him from his car that was pinned against a bridge abutment, Scully recalled. The driver of the other car, Sarah M. Farkas of Naugatuck, also suffered injuries and had to be extricated. She was charged with drunken driving and sentenced the following year to 18 months of probation and a $500 fine.

“I swung to the right so hard that it ripped the carpet under the pedal,” said Scully, who called in what he had seen to dispatchers and then turned around. “I knew I was going to come upon a crash.”

It was one of two wrong-way driving incidents Scully was involved in during his 27 years as a police officer in Thomaston, Naugatuck and Meriden. It still haunts him.

“I think about it every time I drive on Route 8 at night,” he said.

Police departments along the Route 8 corridor are on the alert for wrong way drivers, particularly on weekend overnights when there is a greater statistical likelihood that drunks who often are the cause of such crashes are on the road, said state police Sgt. Paolo D’alessandro, of Troop L in Litchfield. The number of wrong way drivers is unknown, but last year just one was stopped on Route 8, which runs from the lower Naugatuck Valley to its end in Winsted, state police said.

So far this year, four cases are on file with the state police. Statewide, 216 were charged with wrong way driving last year, records show.

Unlike erratic operation along a secondary road, wrong way drivers are moving fast, not always swerving and tend to be extremely intoxicated.

The oddity can seem confusing at first, slowing reaction time.

“These are true emergencies,” D’alessandro said.

When calls began coming in Saturday from the highway, troopers were dispatched to shut the road down in accordance with protocol. Always traveling in the correct direction, state police spokesman Kelly Grant said, the goal is to pull vehicles off to the shoulder ahead of the wrong way driver. But as often happens, Fretts crashed before they got there.

“Sometimes they correct themselves and get off the highway,” D’alessandro said. “It can be like chasing a ghost in the dark.”

The best defensive tactic to avoid a crash is to remain in the right hand lane, said Grant and D’alessandro.

“They might be thinking that they don’t want to draw attention to themselves, or that they are on a two-lane road as cars swerve to the left,” D’alessandro said.

Alcohol isn’t always the reason. D’alessandro said he once stopped an elderly man with dementia heading the wrong way in Waterbury. An elderly woman, told by state police after she was stopped near Torrington several years ago that she was headed the wrong way, asked the trooper how he know where she was going.

It’s still not known what caused Fretts to enter an exit ramp in Waterbury, but police say they have evidence to answer the question. Details remain sketchy as the investigation continues and police keep their developing case under wraps.

But alcohol is the major factor.

Sometimes wrong-way drunks cause mayhem, but don’t kill people. No one died in February 2008 when a drunken driver from Watertown caused six crashes and wrecked eight cars driving north in the southbound lane on Route 8 after entering at Exit 24. Michael D. Kantor smashed his Chevy Corsica into two Subarus, a Toyota and a Honda, and caused three other cars to crash.

Often, however, people suffer serious injury, or die. On April 28, 2012, 24-year-old William Baer Jr. of Beacon Falls was killed along Route 8 when his Honda Accord was struck near exit 27 by Chevy van driven by wrong way driver Edmundo Mendieta, a 34-year-old New Haven man.

Mendieta, who told police he couldn’t remember the drive and had drunk six beers on an empty stomach, was sentenced to 10 years in prison. Like many drunken wrong way drivers, his blood alcohol level was well over the legal limit at 0.221 percent. Front seat passenger Sara Chmielewski, a Stratford resident, was severely injured and permanently impaired.

At Mendieta’s sentencing hearing, Judge Roland Fasano told him the injustice was that he survived the deadly mayhem he created.