The author of the report chalks that up to a mixture of luck and preparedness.

However, Californians in particular should keep their fingers crossed. There’s still time left in the state’s wildfire season. 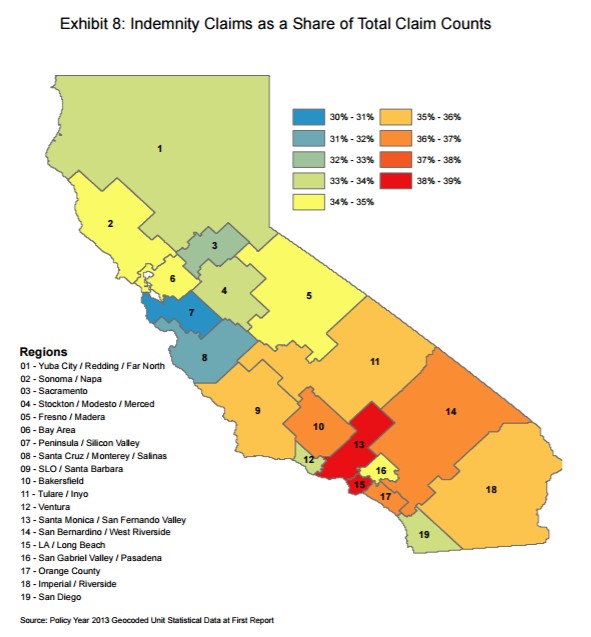 The analysis assigns risk levels to individual properties based on a risk score ranging from 1 to 100 as “Extreme,” “High,” “Moderate” and “Low.”

The score indicates the level of susceptibility to wildfire, as well as the risk due to the property’s distance from high-risk areas. 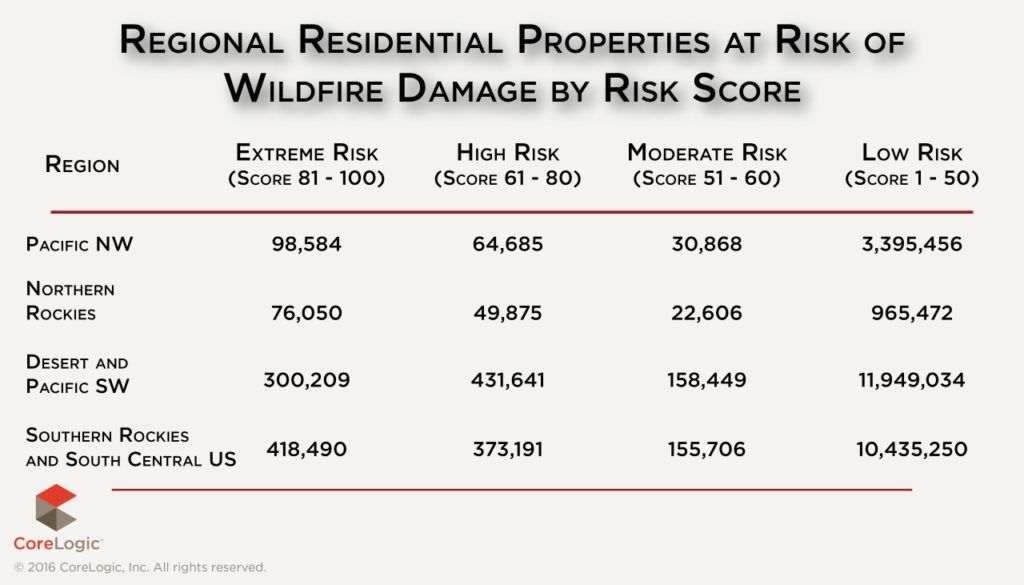 California and Texas rank first and second for the total number of homes in the “Extreme” risk category.

This is due to a large number of residential properties in these states combined with the proximity of high-risk vegetation and terrain, according to the report.

California also has the highest reconstruction value in each of the top two risk levels at more than $250 billion, followed by Texas and Colorado at nearly $94 billion and $54 billion.

California’s Riverside-San Bernardino-Ontario area has the nation’s largest number of homes at “Extreme” risk with 51,775 properties, followed by Sacramento-Roseville-Arden-Arcade (41,937) in Northern California and Denver-Aurora-Lakewood in Colorado (33,226). 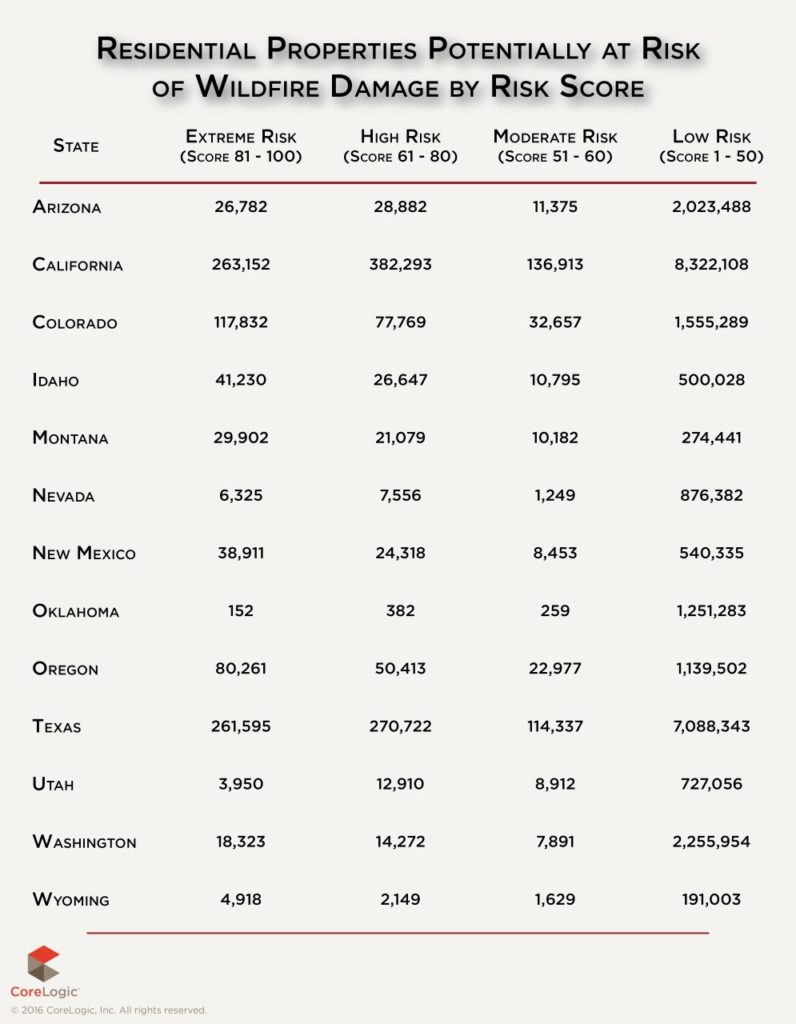 Over the past 20 years 5.8 million acres in the West on average have burned yearly, but 2015 saw 10.1 million acres burned, the highest ever recorded, according to the National Interagency Fire Center.

“Last year was kind of the worst-case scenario,” said Tom Jeffery, an author of the report and a senior hazard scientist at CoreLogic.

During the years running up to 2015 all indications were it would be a bad year due to drought and record high temperatures.

“There’s no question the drought played a major role in that,” Jeffery said.

Scott Smith, vice president of Networked Insurance Agents, has seen the number of carriers with appetites for California’s riskier areas dwindle over the past year.

“In the high brush exposure areas there’s probably been at least a 50 percent reduction in the available carriers, if not more,” Smith said.

After shopping clients with preferred markets, Smith has had to take some of them to the surplus lines market.

If he can’t get them placed in either of those markets, he takes them to California’s Fair Access to Insurance Requirements plan, commonly known as the FAIR plan, then adds on contents or other coverages.

“In a worst-case scenario you go to the California FAIR plan and write a wrap up around it,” Smith said.

Going forward he may have to take more clients to the surplus market or the FAIR plan if the drought persists and continues to curb insurer appetites.

“Right now it’s not that significant in terms of the total percentage of our book of business, but it’s becoming something that we’re dealing with more and more on a day-to-day basis,” Smith said.

A more average wildfire year in the Western U.S. in 2016 may be of some help to agents like Smith.

And with the year’s wildfire season nearly at a close, it’s a good bet 2016 will go down as quietly average, according to Jeffery.

“This year we’re about half of that,” Jeffery said in contrasting 2016 with 2015. “It certainly doesn’t appear like it’s going come close to the record-setting year like last year.”

It doesn’t mean the state is out of the woods. October and November is typically when Southern California experiences strong Santa Anna wind conditions, which sometimes help stoke big fires.

Some of impetus behind 2016’s average wildfire season might be just good fortune – fewer man-made fires, fewer lighting strikes in critical areas, a lull in winds at just the right time.

“I’ve always said over the last few years that luck does play a role,” Jeffery said.

But it wasn’t only a favorable roll of the dice that made this year an average one for wildfires.

Governors in states like California who were concerned about the pervasive drought over the Western U.S. have put more resources into fighting wildfires and getting on top of them early, helping to limit burned acreage and losses, according to Jeffery.

“I attribute a big portion of it to the responders,” he added.

Individual homeowners also get some of the credit.

“People in high risk areas, and especially in California with the drought, everybody gets the story,” Jeffery said. “They understand that there’s a risk, and I think that individual homeowners are doing more to mitigate their property and that’s helping a lot too,”

One stat that 2016 has over 2015’s record-setting year is the number of homes in danger. But that’s just a function of growth.

New construction has continued to surge following the 2008 downturn, while crowded urban populations push people further and further into the wildland urban interface where wildfire danger is greater.

“Overall we certainly do see an increase in the number or properties year-over-year,” Jeffery said. “That’s going to be greater year-over-year moving forward.”

Carole Walker, executive director of the Rocky Mountain Insurance Information Association, has been working to get the word out on the need for residents in wildland areas to take mitigation steps for years.

“Wildfire is a risk that science demonstrates that we can reduce damage and destruction of property by doing ongoing wildfire mitigation both as individuals and communities,” Walker said. “(Wildland urban interface) residents also need to consider their insurability and at least on an annual basis update their insurance coverage and costs to repair and rebuild their homes.”

Also growing from year to year, Jeffery noted, is the capacity for more acreage to burn as long as the drought keeps its grips on the West.

“It’s going to fuel more fires, bigger fires, and that is a threat to property,” he said.