Southern California’s commuter train network has become an early adopter of crash-avoidance technology that one of its own horrific accidents helped make mandatory. 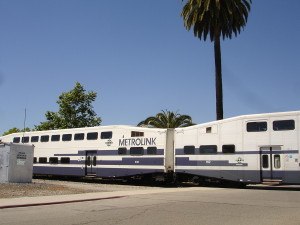 Metrolink quietly rolled out a train Monday morning equipped with “positive train control,” which lets dispatchers halt engines remotely if they speed or blow through stop signals. A second train line will be added Thursday, and Metrolink will cover the entire 512 miles of track its trains operate on within about a year, a spokesman said.

While positive train control has been around for decades, Congress mandated the technology in 2008 after a Metrolink engineer ran a red light while he was texting and crashed head-on with a freight train. That accident killed 25 people and injured more than 100 others.

Lawmakers decreed that the technology must be in use by the end of 2015, though it is widely recognized that not all train systems will be able to comply by then.

Positive train control uses GPS, wireless radio and computers to monitor train position and motion. A train that is speeding, on a collision course, going the wrong way, or encountering some other problem can be controlled from a dispatch center. The goal is to prevent human error, which is responsible for about 40 percent of accidents.

The rollout will be done gradually, in part because Metrolink trains share track with freight companies that also must outfit their trains so that the two can “talk” to each other. Metrolink projects its total cost to be $216 million.