Despite a rash of deadly train crashes, the railroad industry’s allies in Congress are trying to push back the deadline for installing technology to prevent the most catastrophic types of collisions until at least 2020, half a century after accident investigators first called for such safety measures.

Under a law enacted in 2008, the systems called positive train control or PTC are supposed to be up and running by Dec. 31, 2015. A handful of railroads are expected to meet that deadline. But the rest of the industry says despite spending billions of dollars on the systems, they face logistical and technical hurdles and need more time. Four senators with industry ties recently introduced a bill to extend the deadline another five to seven years. 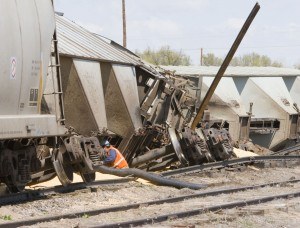 The delays show how a powerful industry can stall regulations it doesn’t like, even after they’re enacted into law. The National Transportation Safety Board has investigated 27 train crashes that took 63 lives, injured nearly 1,200 and caused millions of dollars in damage over the past decade that officials say could have been prevented had the safety system been in place. The NTSB first recommended advanced train control systems in 1970.

“This is not an issue where the industry is trying to get out of this mandate,” said Ed Hamberger, president and CEO of the Association of American Railroads. “We have invested too much in it already, and it is in our best interest to get it done as soon as possible.”

But safety, labor and passenger advocates are skeptical that most railroads will ever implement the system without more government pressure.

“When they are pushing for a five-year extension with no changes you have to wonder if they aren’t hoping that some deregulatory White House will come along before then and just lift the burden,” said Ross Capon, president and CEO of the National Association of Railroad Passengers.

“It’s one thing to say we can’t get it all done by the end of 2015. It’s quite another thing to say we want a blanket, industry-wide pass for five more years,” he said. “That’s suggestive of bad faith.”

“For every day that it is delayed, the threat of another accident remains,” NTSB member Robert Sumwalt said.

Sen. John Thune, R-S.D., chief sponsor of the bill to extend the safety deadline, has received $672,836 in political contributions from the railroad industry and associated individuals since 1998. One of his top contributors was DM&E Railroad, based in Sioux City, S.D., which had close ties to the South Dakota GOP. It was acquired by Canadian Pacific Railways in 2008.

“I think it’s important that we as Congress be careful not to impose undue regulation on the railroad industry,” especially if regulations sap money needed for infrastructure improvements, Thune told a Senate rail safety hearing in June.

The safety system uses GPS, wireless radio and computers to monitor train position and speed and stop them from colliding, derailing because of excessive speed, entering track where maintenance is being done or going the wrong way because of a switching mistake. It’s all aimed at preventing human error, which is responsible for about 40 percent of train accidents.

Such a system would be “a game changer” for safety, Joseph Szabo, head of the Federal Railroad Administration, told the Senate hearing.

A dramatic example of the type of accident PTC is designed to prevent occurred in July in Spain when a train traveling twice the speed limit derailed going around a curve, killing 79 people and injuring dozens more.

The NTSB put a newer version of the technology on its “most wanted” list of safety improvements when the list was created in 1990. The government has been funding demonstration projects for decades.

After several failed attempts, Congress was prompted to require positive train control by one of the nation’s worst train accidents. On Sept. 12, 2008, a Metrolink commuter train struck a freight train head-on near Los Angeles, killing 25 and injuring more than 100. Investigators said the Metrolink train’s engineer was distracted by text messages, allowing the train to run through a red signal – precisely the type of accident the system is designed to prevent. The law gave railroads seven years and three months to install the technology.

The requirement applies to Amtrak and 25 commuter railroads, which together carry 564 million passengers annually, and the track they share with freight trains. It also applies to freight-only trains and tracks used to transport a category of hazardous materials poisonous to breathe, in response to a 2005 collision of two Norfolk Southern trains in Graniteville, S.C. A chlorine gas tank car was derailed and punctured, releasing a toxic cloud. Nine people were killed and hundreds injured. A textile plant that employed most of the town’s residents was severely damaged and closed.

But pressure from industry has eroded the law’s reach. Initial estimates were that positive train control would cover about 70,000 miles of track – less than half the nation’s total. Now, that figure has shrunk to 50,000 miles. Regulators have given railroads permission to install less expensive PTC systems that won’t prevent certain rear-end and low-speed collisions.

Freight railroads have campaigned to exclude tracks used only a few times a year to transport poisonous-to-breathe cargo. They also want to reroute trains containing such cargo to track shared with passenger trains, further reducing the amount of freight-only track that has to be equipped with PTC, said Grady Cothen, a former railroad administration official.

A weakness of the 2008 law is that it doesn’t cover other types of dangerous cargo, including crude oil and ethanol, Cothen said. Last month, an unattended train transporting 72 cars of crude oil came loose, hurtling down a 7-mile incline before derailing and igniting in the lakeside Quebec town of Lac-Megantic near the Maine border. The fiery explosion killed 47 people, and destroyed much of the town.

PTC wouldn’t have prevented that accident, but the disaster underscores the risks of such shipments. U.S. railroads moved 178,000 crude oil carloads in the first half of this year – twice the number during the same period last year and 33 times more than during that period in 2009.

While most railroad officials emphasize the train control system’s cost, a significant side benefit not figured into cost-benefit calculations is that it can improve the efficiency of railroad operations, saving companies substantial sums, Cothen said.

PTC requires significant coordination between railroad companies operating on the same tracks since the software they choose must be compatible – a challenge to installation. Freight railroads also are still working on technical specifications, adding to delays. And some commuter railroads are struggling to find the needed radio spectrum to purchase, as well as the money to pay for both positive train control and other pressing repairs.

Szabo, the Federal Railroad Administration official, said he wants Congress to give the administration authority to grant case-by-case extensions. He said the key is finding an “appropriate balance between keeping feet to the fire” and making sure “it is done safely and reliably.”