A new study concludes that firefighters aren’t capable of responding to calls within nationally recommended time frames in certain parts of Albuquerque and Bernalillo County.

The Albuquerque Journal reports that the study completed this month by the International Association of Firefighters points to limited manpower, not enough fire trucks and a lack of real-time communication between the Albuquerque and Bernalillo County fire departments as primary reasons for gaps in service. 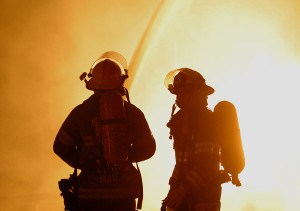 The report recommends new ladder trucks for each of the departments, additional pumper trucks for Albuquerque Fire Department and three new battalion commander positions for the AFD.

Albuquerque Fire Chief James Breen disputed parts of the union study, saying the department is meeting national safety standards but agreed with other aspects, such as a finding that fire and rescue responses would improve if the city and county merged their dispatch centers.

Although there are efforts under way to improve communications between the two departments, they don’t use the same computer-aided dispatch software and their radio frequencies aren’t synced in real time.

But Breen took exception with some of the study’s findings, saying AFD is meeting the national standards by creatively dispatching the resources it has.

The standards, laid out by the National Fire Protection Association, say ladder trucks should have at least four firefighters aboard and be able to respond to 90 percent of calls within eight minutes.

AFD and Bernalillo County Fire Department staff the ladder trucks with four firefighters about 40 percent of the time, and according to the study, current staffing levels and equipment prevent them from arriving within eight minutes in certain parts of the city and county.

First-responding units that provide basic life-support services, including pumper trucks for fires and ambulances for medical calls, should be able to reach 90 percent of calls for fire and medical help within four minutes, according to the NFPA standard.

Again, AFD and BCFD don’t have the resources to meet the standard in all areas of the city and county, according to the study.

Another study was being completed by a consultant hired by Mayor Richard Berry’s administration to find ways to cut costs in city government. A draft copy of that report from Matrix Consulting Group, obtained by the Journal after a public records request, lays out a different vision of how to move the fire department forward.

As possible places to cut expenses, the Matrix report questions whether AFD is “over-responding” to fires and whether the department needs two paramedics on each rescue unit. It also recommends ending the practice of staffing the AFD dispatch center with sworn firefighters.