Yamina Grafal, Walther Avila Lainez and Gennie Avila Lainez were identified as members of a crime ring that allegedly played various roles when conducting an arson-for-profit scheme, fraudulently collecting at least $187,000 in insurance payouts by setting seven residential structures on fire between 2009-2016 in Miami-Dade, Lee and Collier County.

The investigation was initiated after authorities received information from Citizens Insurance regarding falsified receipts in support of an insurance claim for a fire loss. This investigation revealed that multiple individuals had conspired to rent residential properties, and after obtaining renter’s insurance, intentionally set the homes on fire for economic gain. The fires were set in such a manner that responding fire departments did not suspect criminal activity.

The investigation revealed the following locations were intentionally set on fire:

The following individuals have been arrested: 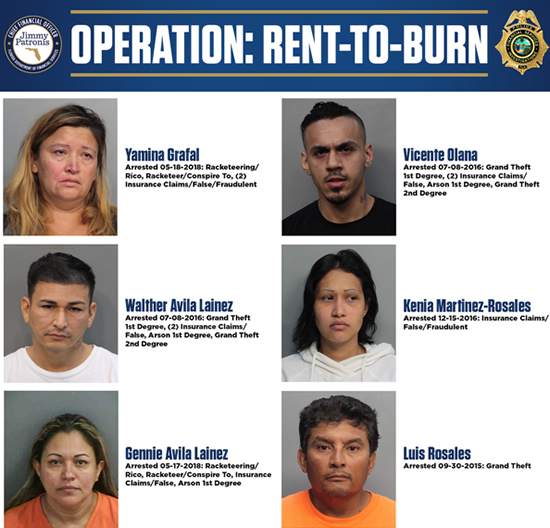 Walther Avila Lainez was taken into custody May 17, 2018 in Tennessee by ATF agents and the Hamilton County Tennessee Sheriff’s Office. He is in custody pending extradition to Florida.