Architect Kobi Karp has a vision for affordable housing in the Florida Keys: residences set at coconut-tree height to keep them dry, atop concrete columns holding them in place.

Key West clients sought out his designs before Hurricane Irma struck the island chain this month, and he thinks the two projects will continue despite Irma’s damage and debris. “It’s a more cost-efficient way of life,” the Miami-based architect said.

Such modern, planned development hasn’t always appealed to the independent spirits living in the Keys – but Irma may force the laid-back landscape to change. 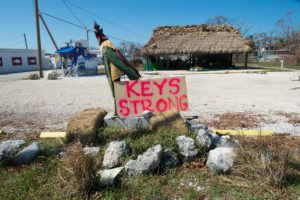 A handwritten sign of encouragement to the Florida Keys community sits on the side of Overseas Highway in Marathon, Florida after Hurricane Irma. Sunday, September 17, 2017. PHOTO BY J.T. BLATTY / FEMA

Local officials are racing to find those workers housing to keep them in the Keys but still free up hotel rooms by Oct. 20, the opening day of the decadent Fantasy Fest and one of the biggest events on the Key West tourism calendar.

The housing crunch affects all sectors of the community: About 50 city employees may need to relocate, Key West city spokeswoman Alyson Crean said. Keys firefighters who lost everything have moved into fire stations or the homes of friends and relatives. On Duval Street, bar and tour company owners said some shell-shocked employees just quit because of the damage.

“When housing is eliminated, as it was in this storm, there’s literally no place for these people to move to. There’s no suburbs, there’s no driving for an hour and a half to find someplace to live. That’s just not possible here,” said Ed Swift, president of Key West-based Historic Tours of America, where at least a handful of employees have decided not to rebuild their lives here.

The Keys don’t function like other places: There’s only one narrow road in and out, and the isolation fosters a small-town, mom-and-pop atmosphere that has persevered amid booming numbers of tourists seeking Mardi Gras-style revelry and luxury accommodations.

As Key West rents rose over the last 20 years to $2,000 a month or more for two-bedroom units, Swift and other business owners started building housing, including dormitory-style accommodations, to keep local employees. Low-cost trailers and RVs helped fill housing gaps, but there’s already talk about replacing them altogether.

That worries people like U.S. Sen. Marco Rubio, R-Fla., who sounded wistful on the Senate floor last week about a paradise potentially lost.

“This storm threatens to fundamentally alter the character of Monroe County if we do not help the Florida Keys, because those trailer parks are on valuable land, and the owners of that land are going to be tempted to build on them – not mobile homes again, but build on them structures designed for visitors or people that can pay more money,” Rubio said. “That means you’re going to lose your housing stock, but it ultimately means you’re going to lose the character of the place.”

Irma destroyed or severely damaged up to 15,000 residential units, including vacation homes – amounting to more than a quarter of the 55,000 total homes in the Keys, according to Monroe County estimates.

The county has asked the Federal Emergency Management Agency for 7,500 temporary mobile homes, as well as at least 1,700 travel trailers to park outside individual homes being repaired or rebuilt. It could be months before those units reach everyone who needs them, because of low inventory after Hurricane Harvey in Texas and other disasters, county and FEMA officials say.

The county also is asking mobile home park owners to allow FEMA to set up temporary housing on their properties, once cleared of debris and reconnected to power and water lines. Those mobiles homes would eventually need permanent replacements. It would be safer to build houses or apartment buildings, but that would change the lifestyle that appeals to many Keys residents, Hurley said.

Nine of Hurley’s employees were made homeless by Irma, but even those who faced significant financial challenges before the hurricane are making their way home, she said.

“I haven’t heard yet of people that don’t want to come back,” she said.

At Sunshine Key RV Resort and Marina on Big Pine Key, Richard Lessig said he wouldn’t mind new neighbors, even in government-issued trailers. He currently doesn’t have any, not since Irma flipped or crushed all the other trailers in the park.

Lessig’s own trailer home isn’t quite level, its air conditioning runs off a rumbling generator, and there was still no running water last week.

He’s gotten by in the Keys for nine months each year with his benefits and whatever money he makes in seasonal jobs as a boat captain and a magician for children’s birthday parties. He applied for disaster aid, wondering if he would have to spend more time living with his sister in New Jersey than in the Keys. He worried some friends won’t return for the potluck lunches and happy hours that made the park a vibrant community.

“Hopefully most of them will come back, but I’m sure there’s some that won’t,” Lessig said. “I figured, worst case, I’d have to borrow money and buy another trailer, because this is where I want to be.”