When Darryle Brown woke up in the dark hours of an early December morning, he heard an explosion.

Suddenly, Brown was on fire and trapped underneath an eight-inch-thick concrete slab – the floor of his fiancée’s two-story apartment unit in Birmingham, Ala., according to his attorney, Glenda Cochran.

Most people who heat their houses, apartments and businesses with natural gas don’t think twice about the age or the condition of the pipes delivering this resource – or that they could potentially be deadly.

The explosion at the Charles P. Marks Village last December was caused by a crack found in a cast-iron service main near the neighborhood, according to the National Transportation Safety Board, which investigates pipeline accidents.

Brown, who 10 months later is still recovering from severe burns and crush injuries, was one of nine people in the apartment building when it exploded without warning in the middle of the night. His fiancé, Tyrennis Mabry, died in the explosion. 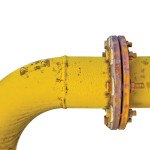 Cast-iron and bare steel piping is made out of metal, and therefore more likely to corrode and rust over time, causing undetected cracks and holes from which gas can leak. Gas will typically migrate to an open space – and that open space could be under a building or in someone’s basement.

With an increase in the number of reported incidents related to these antiquated, dangerous pipes, the U.S. Department of Transportation Pipeline Hazardous Materials Safety Administration has required for decades that the pipes be replaced.

The pipeline that caused the explosion was built and operated by Alabama Gas Corp., which serves the most customers in the state of Alabama. The company has the most miles of main pipelines made out of cast iron – which if not replaced can cause leaks, fires and explosions – than any company in the state, according to federal data.

They also have the ninth-highest number of cast-iron main miles out of more than 1,000 gas companies in the country.

The 833 miles of cast-iron pipes make up 7.5 percent of the company’s main gas lines, which is three times the 2.5 percent national average.

Although the Montgomery Advertiser has been trying since early August to get questions answered by Alagasco officials, the company has declined to answer questions or grant interview requests.

Despite the need to replace these aging pipes, there are no specific time frames or procedures that govern the replacements. Federal guidelines require that every gas company maintain a Distribution Integrity Management Plan that addresses the conditions of pipes and outlines a plan for their replacement.

In Alabama, the Public Service Commission (PSC) can use the document to conduct evaluations and audits. Every year, the company has filed its plan with the PSC.

These plans assess and address potential threats to pipelines, including corrosion, natural forces, material or weld failure and other damage caused by digging or doing work on or around pipes. They’re also supposed to provide a plan for identifying pipes in need of repair or replacement.

The cost of replacing those 82 miles was about $31 million, the statement said.

The Birmingham duplex, which is owned and operated by the Housing Authority of the Birmingham District, were blown up by pipes that were constructed with cast iron around 1951, according to the NTSB.

“If you have a cast-iron pipe in the ground, it’s a huge red flag,” said Leila Watson, who is representing the Mabry family in a civil lawsuit against Alagasco and the housing authority. “If you’ve got a cast-iron pipe, you can’t just treat it like it’s an intact pipe. You have to keep monitoring it and stay on top of it.”

Watson said as a result of the explosion, the company has replaced the cast-iron piping at Marks Village. In January, within 30 days, the company went door-to-door and offered to move people out.

Alagasco officials, however, said they couldn’t comment on the explosion because the investigation by the NTSB is still ongoing, and deferred all questions to the federal agency.

“The explosion in Mark’s Village lets them know that the work they did in 1952 has deteriorated,” Watson said. “It’s rusted.”

Watson said there’s another housing complex in Birmingham, Loveman Village, which was being constructed at the exact same time as Mark’s Village. Because of segregation, Loveman’s was constructed to house low-income African-Americans, and Mark’s Village was for low-income whites.

Watson said she’s not sure if the pipes at Loveman’s have been repaired or replaced, but she’s concerned that something similar could happen there.

According to Alagasco’s 2013 DIMP, which includes figures from 2012, the Birmingham service area has the most miles of cast-iron main piping with about 647 miles, which is about 73 percent of the company’s total number of cast-iron service mains.

The service area includes eight counties and more than 260,000 customers.

The Montgomery service area, which includes five counties, is second with about 9 percent and Opelika is third with 6 percent.

A preliminary investigation of the Marks Village accident found the explosion was caused when gas leaked underneath the concrete slab foundation. The accident completely destroyed the duplex-style apartment building, and several nearby buildings were damaged, according to information from the NTSB.

The concrete slab holding up the second floor of the apartment complex landed on top of Brown and Mabry during the explosion, according to Cochran, who is representing Brown in a civil lawsuit against Alagasco and the housing authority.

Cochran said the thick concrete slab had to be jacked up so Brown could be removed. The process was “tedious and time consuming,” she said.

Data on Alagasco’s gas leaks – which includes both main and services lines – shows that most leaks are caused by equipment failure, followed by excavation and then corrosion.

There were fewer than 210 leaks in each of the other categories of leak causes, which includes natural forces, material or welding failure, excavation damage and other factors.

Of the hazardous leaks, 32 percent were caused by excavation damage and 26 percent by corrosion. About 2.3 percent of all Alagasco’s gas was unaccounted for, which is in line with the 2.29 national average.

Alagasco has about 59 hazardous leaks per 1,000 miles of pipelines, according to federal data. The average in the state is 13 leaks, and the national average is about 35. Three of 79 companies in Alabama, including Lanett Gas Department, Mulga Natural Gas System and Cherokee Water Works & Gas Board, have higher leaks per thousand miles than Alagasco.

Data in Alagasco’s DIMP also shows leaks caused by corrosion are declining, but staff in each “work location” or service area, ranked corrosion as the second-highest overall threat to pipelines.

The corrosion of pipes and fittings are rated second only to excavation damage, which is characterized in the report as being damage by third-party contractors and other utilities.

Excavation and the corrosion of mains and services that need to be replaced because of age and condition was identified by Montgomery as the greatest threat.

In the integrity management plan, Alagasco also assesses the risk of both main and service lines by comparing the likelihood of an accident to the impact of an actual accident.

Montgomery has the most miles of main and service lines with a very high risk. About 42 percent of all very high-risk pipes are in Montgomery, mostly in the downtown area.

Because of the pending NTSB investigation, attorneys for both Brown and the Mabrys say the cases have been delayed. Both were filed in Jefferson County Circuit Court.

“Generally when you file a lawsuit, you ask for all the relevant documents, including information related to leak surveys and complaint files,” Watson said.

Watson said the family members who were in the apartment during the explosion were recently interviewed by the NTSB.

Tyrennis Mabry, 40, died from crush and burn injuries in the explosion, Watson said. Her two teenage sons were sleeping upstairs with their grandmother, Denise Mabry, when it happened. One of her sons was literally blown out of his bed in the explosion.

Denise slid out of her bed and became buried under a pile of bricks outside, Watson said. She wasn’t pulled out until one of her grandson’s saw her hand moving above the rubble.

Watson said the injuries suffered by Denise and the boys weren’t extensive, but the boys are still traumatized.

Watson said she didn’t know a lot about the other family in the duplex, the Goins family, but there were small children in the apartment who survived.

The Mabrys are suing both Alagasco and the housing authority for several counts of negligence, liability and wantonness for wrongful death and personal injuries. The lawsuit was filed in January.

Brown, who filed his lawsuit in July, is suing the same parties for several counts of negligence and wantonness.

Cochran said Brown suffered from severe burn, crush and inhalation injuries in the explosion. He’s had a number of skin-graft procedures and an escharotomy, which is when doctors are required to slit the skin open to relieve pressure.

Cochran said they’re slowly getting access to more and more documents, so the lawsuits will be able to move forward.

NTSB officials said the investigation is expected to be complete about a year from the accident, which will likely be this December.