Golf cart owners in Georgia will soon have stricter requirements to follow if they plan to drive their carts on roadways. 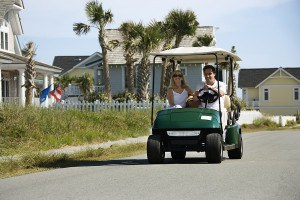 A new law taking effect Jan. 1 creates a separate classification of personal transportation vehicles for golf carts. It also sets standards for towns and counties wanting to create ordinances allowing drivers to use the carts on residential streets and multi-purpose pathways. The law requires that golf carts have braking systems, a reverse warning device, tail lamps, a horn and hip restraints.

The carts must weigh less than 1,375 pounds and not top speeds of 20 mph. The carts must also be registered with the Department of Motor Vehicles.

The bill was signed into law by Gov. Nathan Deal this year after his predecessor, Gov. Sonny Perdue, vetoed a similar measure last year. It had backing from one of Georgia’s key industries – golf cart manufacturing.

The Georgia-based International Light Transportation Vehicle Association, formerly known as the National Golf Cars Manufacturers Association – which prefers the term “car” to “cart” – estimates that 90 percent of the golf carts used in the U.S. are made in Georgia.

“Safety is what we’re concerned about,” said Fred L. Somers Jr., secretary of the association. “Unless you put in some safety equipment accessories, you’re just asking for trouble.”

And, he added, golf carts are a cheaper form of transportation for people who live in cities where they don’t need to travel far to go to the grocery store.

Just 23 Georgia cities have golf cart ordinances, with some places like Peachtree City near Atlanta and Hahira in South Georgia creating golf cart lanes along local roadways, according to the Georgia Municipal Association. Spokeswoman Amy Henderson said the ordinances began popping up a couple of years ago when gas prices spiked, pushing people to cheaper alternatives for getting around town.

State lawmakers who sponsored the legislation did not return requests for comment.

Other laws going into effect next week include a measure allowing cities with 911 centers to require retailers selling prepaid cell phones to charge a fee to support the emergency systems. Towns can charge businesses up to 75 cents per sale, though the fee doesn’t apply to sales of $5.00 or less.

Key parts of Georgia’s new law targeting illegal immigration are also set to take effect. Starting Jan. 1, any employer with 500 or more employees will have to use a federal database called E-Verify to check the employment eligibility of all new hires.

The mandate is being phased in with smaller businesses that have 100 or more employees required to use the database starting July 1, and companies with more than 10 employees to start using E-verify by July 2013.

Employers with 10 or few employees are exempt from this requirement.

The law’s sponsor and supporters said they wanted to deter illegal immigrants from coming to Georgia by making it tougher for them to work in the state. Already, any company with a federal contract is required to use E-Verify, and Georgia has required state and local government agencies and their contractors to use the database since 2007.

But the new law could cause trouble for many businesses, experts say.

“Many Georgia businesses are confused with respect to the provisions of the law that have to do with E-Verify,” said Atlanta lawyer Teri A. Simmons, who advises businesses on immigration and employment matters. “Within most businesses, human resources professionals are already dealing with so much that it’s hard to also fit in E-Verify training and administration.”

When Georgia’s governor signed the law in May, Georgia joined Arizona and several other states that have recently enacted tough laws taking aim at illegal immigration. Federal judges have since blocked all or parts of the various laws, and Arizona’s is headed to the U.S. Supreme Court next year.

Also taking effect Jan. 1 is a provision that any agency administering public benefits must require each applicant to provide at least one “secure and verifiable document.” A list of acceptable documents was provided by the attorney general’s office over the summer.

Bayer Accused of ‘Pay to Appeal Scheme’ by Roundup Lawyers