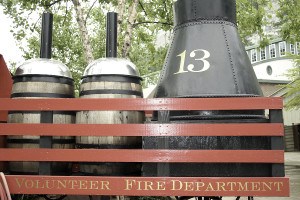 While calls to volunteer fire departments are on the rise, the ranks of these volunteers are dwindling in Middle Tennessee and officials hope a younger generation will step up to the service.

Volunteer fire departments account for about 80 percent of all fire stations and 70 percent of all Tennessee’s firefighters are volunteers. But fire officials say departments face more intensive training requirements than ever before and demands of work keep people from making a commitment to the community, the Tennessean reported.

“Now with everyone going to college . and people working out of town, and the generation we’re in, it’s a tough thing to work with,” said P.J. Duncan, assistant chief for the Pleasant View Volunteer Fire Department. “The recruit rate is low. The retention rate is lower.”

In growing Pleasant View, calls have increased from 300 to 1,500 annually during Duncan’s 22 years with the department.

Officials are looking to reverse the trend and entice young people to help support volunteer fire stations. They see some promise in recapturing childhood imagination about being a firefighter in the launch in 2007 of a National Volunteer Fire Council junior firefighter program that gives teenagers a chance to see the equipment, fire trucks and emergency scenes.

But with video games and school work, competition for teens’ attention can be fierce.

“There’s so many things pulling at these kids,” said Brian Vann, recruitment and retention officer in Pleasant View.

An Explorer program through the Boys Scouts of America provided Pleasant View with more than a dozen students at one point, but had shed participants over time.

“We’ve yet to find a way that really keeps people here,” Vann said.

Derek Drilling, 19, of Hendersonville, participated in a youth program in Sumner County as a high school junior after being interested in fire fighters as a child.

“When I was little, I’d see the engine go by and the tanker go by,” he said. “I kept looking for ways to get in it at a younger age.”

Now he runs a landscaping business that allows him to respond to most of the department’s 400 calls each year and even recruited two friends into the department.

Matthew Lilly, also 19, is the newest volunteer at the Arrington Volunteer Fire Department. He’s been reaching out to teenagers by sharing stories of fires and rescues during an emergency course at Page High School in Franklin. He also participated in almost 100 ride-alongs to emergency scenes through a youth program before joining the department.

“I have a bit of a step above (others) because I have all this experience,” he said.

Lt. Alan Fulwood moved up the ranks from a junior firefighter to the training officer at the No. 1 Volunteer Fire Department in Hendersonville. He said volunteers want a challenge, but training requirements can scare off some people. So he tries to keep training interesting. He gives his volunteers a challenge by having them spray a ball back and forth with the water hose to teach control.

Capt. Brandon Howard, who is a paid firefighter for Wilson County Emergency Management and volunteers at the Watertown Volunteer Fire Department, said he would rather have fewer highly trained firefighters than more people who are less committed.

At a basic firefighting class hosted in Portland by the Highland Volunteer Fire Department, students were looking for a way to transition into paid, career positions. But they also felt the call to help.

“I want to literally be the difference in saving a life,” said Sara Bosshart, 24, who wants to volunteer to get experience.

The firefighters practiced in groups of three crawling through a small house that resembled an old red barn. Fire instructor Chad Fresen called out situations, criticisms and praise as they came out breathing heavily.

When one group failed to save a downed firefighter in their mock situation, Fresen demanded improvements.

“We’re in this business to look out for each other,” he said. “It’s not a game.”