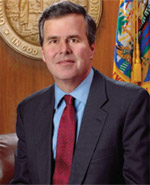 From medical malpractice to workers’ compensation, Florida Gov. Jeb Bush {R} has been working with insurance industry leaders to solve problems in the Sunshine State during his two terms in office. The issues in Florida are also being watched nationally as other states look to fix problems in their respective states.

Bush recently took time out to respond to questions from Insurance Journal about how Florida is dealing with the med-mal crisis, how it fights fraud, state vs. federal regulation, and more. Below is the interview with Florida’s Governor.
Dave Thomas: What more needs to be done to address the medical malpractice situation across the country and how has Florida dealt with it?

Jeb Bush: Florida is just one state among many facing a reduction in access to medical care because of a dysfunctional tort system that drove malpractice insurance rates up and doctors out of practice. We each have some unique circumstances, but the fundamental causes are the same state to state, and so are the results. For every doctor who is forced to leave or limit practice, there are literally thousands of patients who lose another healthcare option.

To fully address the long-term problems we must create certainty and stability in the insurance market. We just passed a reform package, after a contentious debate, here in Florida that should provide some relief for our residents, and the doctors who serve them. It’s comprehensive, addressing caps on non-economic damage awards, acts of bad faith, improved physician discipline and several dozen other recommendations from an academic task force that studied the issue. From the beginning, it was clear that any real reform must protect patients’ access to care while improving the care patients receive. It must also create a better system of discipline for physicians, revive the insurance market, and encourage a fair litigation system. I believe our legislation does this. It may not be the final resolution, but it’s a good start.

I think the biggest challenge for states trying to legislate their way out of this crisis is finding facts that everyone agrees are real. One of the best things to come out of this debate is a commitment to gather data going forward that truly tracks the issue and maps the problems. We think we’re on the right track, but in the future we’ll have the data that either proves we are, or tells us we need to take another look at the solution.

DT: What are your thoughts on state vs. federal regulation of insurance?

JB: I’m a strong proponent of smaller government, not growing government, so as a rule I tend to support less federal regulation. However, so many states are facing the same issues, and coming up with different approaches, that may or may not work to protect consumers, it might make sense for some federal options. For example, the legislation created by Republicans in Congress addressing medical liability insurance could create stability in insurance markets across the country.

This would alleviate some of the pressure on the states that are watching helplessly as their insurers leave in droves. However, it will continue to face fierce opposition from attorneys groups and probably some insurers who most likely won’t be comfortable with increased interference in their business.

JB: Florida has worked hard to build a business climate that is extremely attractive. Fiscal discipline at the state level has allowed us to create a business friendly tax and regulatory environment that attracts investment and jobs to our state. We’re committed to this goal, and to addressing the issues that hinder it.

Our workers’ compensation system was definitely becoming a hindrance – for employers and workers alike. Florida businesses, especially the smaller ones, paid some of the highest workers’ comp premiums in the country, while our workers received the lowest benefits. The system wasn’t protecting Florida workers like it should and its burdensome cost was creating a true competitive disadvantage for Florida companies. Insurance rates were high because costs were high. Costs for permanent total disability claims in Florida were three times the national average, while medical costs for permanent partial claims were more than two times higher. Medical costs for temporary total disability were a whopping 60 percent higher.

This year we passed reform legislation, geared toward reducing rates and protecting workers. In August we started to see the impact, when the Office of Insurance Regulation approved NCCI’s proposal to lower workers’ comp rates by 14 percent. That’s an immediate $400 million in savings for Florida businesses. We expect to see more savings as the reforms continue to take effect. We were able to reduce rates while increasing benefits for workers, including enhancing permanent partial disability benefits. We achieved this by replacing a system that paid attorneys an hourly fee with a contingency fee system, which will speed up the claims process.

We reduced fraud by increasing the penalties for individuals or companies who try to defraud the system and by increasing the Division of Workers’ Compensation’s ability to sanction abusers. The only way to lower rates long term is to find ways to remove cost from the system. Encouraging a speedier process and eliminating fraud does that.

DT: What is your working relationship with the insurance commissioner and how many resources (financial/personnel) are devoted to the department?

JB: Florida no longer has a formal Insurance Commissioner. In our effort to streamline government, Florida collapsed that office into the financial organization of our state. The Office of Insurance Regulation (OIR) is now under the Department of Financial Services. The OIR is responsible for regulating insurance companies, including licensing, rates and solvency, etc. Our current CFO, Tom Gallagher is the former Insurance Commissioner. As CFO, he is a Cabinet Member, with the access and input that implies. He is ultimately responsible for the oversight of OIR, although he doesn’t direct its day-to-day operations. The current structure, closely linking the Department of Financial Services and the Office of Insurance Regulation represent a more comprehensive approach to insurance regulation in the State of Florida. And it ensures OIR has resources required to get the job done.

DT: Because of its locale, how does Florida address hurricanes from a claims standpoint and how does it step in to help residents who lose property?

JB: There’s a price to be paid for living in paradise, and in our case it’s hurricanes. The last major landfall was Hurricane Andrew a decade ago. It taught us a lot. Fortunately we’ve had time to put those lessons to good use since then. We’re primarily concerned with ensuring our residents are safe.

Next in priority is to make sure that they have the catastrophic property insurance they need to protect their homes and businesses. We passed legislation to lower the catastrophic property insurance costs for thousands of Floridians. We combined Florida’s current insurers of last resort, the Florida Residential Property and Casualty Joint Underwriting Association (JUA) and the Florida Windstorm Underwriting Association (FWUA) to create a federally tax-exempt Citizens Property Insurance Corporation (Citizens) that will provide full wind, hurricane, and hail coverage for residential and commercial properties unable to obtain other insurance. These laws also ensure that those who rely on this coverage are getting the best insurance for their money.

We’ve also worked closely with the federal government to ensure that the Florida Hurricane Catastrophe Fund is funded and ready to reimburse insurance companies in the event we have another catastrophic hurricane that creates massive property claims.

DT: What has Florida done to welcome and keep insurance companies in the state?

JB: I’m a big believer in the power of the free market. We’ve created an environment where most businesses can thrive, and in the last year we’ve focused on making Florida more habitable to insurance companies specifically. We’ve seen the devastation left in the wake of insurers fleeing the state, and we’re committed to bringing them back to a fair and stable market.

Like any business, insurance companies will operate where they can make money. No one opens a business with the express purpose of losing money, and we can’t expect insurers to stay anywhere they pay out more than they can take in. For example, malpractice insurers were paying an average of $1.40 in claims for every $1.00 in premiums collected. Not a successful business model. A few years ago we had more than 60 insurers writing malpractice policies in Florida. Today we have two or three. Our recent reform legislation, that provides predictability through real damage caps, should help make us more attractive to insurers.

The legislation passed to reform the workers’ comp and medical liability insurance systems are steps in the right direction. They’ll help foster a free market insurance system based on the principles of competition and fair play and help limit litigation and fraud.

DT: Has being governor of Florida been all you thought it would be and what are your future goals?

JB: I absolutely have the best job in the world, governor of the most dynamic state in the country. It has been all I thought it would be and then some. I love what I do, and am proud of what we have been able to accomplish so far. I am grateful that the people of Florida gave me the chance to serve them. My goal is to be the best governor I can be and to use my second administration to focus on driving education achievement, strengthening families, and increasing economic diversity in our state.

DT: Have your father and/or brother been role models for you in the way you govern?

JB: I think we’re all reflections of the people who love us throughout our lives. I’ve been especially blessed to come from such a strong family of servant leaders. My dad is one of the greatest men I have ever known, and I’m extremely proud of the job my brother is doing as President of this country.