Beta, a slow-moving tropical storm, will bring flooding rains to Texas and Louisiana as well as raking offshore energy fields with high winds, but may not reach hurricane strength.

Beta’s winds will likely hold at 50 miles (80 km) per hour as it approaches the Texas coast, where it could drop between 5 to 10 inches (13 to 25 cm) of rain, including in flood-prone Houston, with some areas getting as much as 15 inches, the U.S. National Hurricane Center said in a advisory at 5 a.m. New York time.

The storm is forecast to come ashore near Corpus Christi. Category 1 Hanna also struck southern Texas this year, the first hurricane to make landfall in the Lone Star state since Harvey in 2017, and the first to hit in the month of July since Dolly in 2008.

“The expected slow motion of Beta will produce a long duration rainfall event from the middle Texas coast to southern Louisiana,” John Cangialosi, a forecaster at the hurricane center, wrote in an outlook. “Flash, urban, and river flooding is likely.” 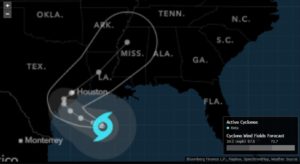 A tropical storm warning has been issued along the Texas and Louisiana coastline, and storm surge of as much as 5 feet is possible in many areas, including Galveston Bay. Initial forecasts called for Beta to become a hurricane, but wind shear tearing at its structure and dry air nearby have robbed it of strength, Cangialosi wrote.

A flash flood watch has been posted in Houston and its immediate area, the National Weather Service said. The rains will put lives and structures at risk.

Beta is the Atlantic’s 23rd storm for 2020 so far, the second most active season in records going back to 1851. So many storms have formed that the hurricane center has used up all the names on its official list and has begun designating new storms with Greek letters.

Tropical Storm Alpha formed Friday off Portugal, whipping up high winds that briefly suspended play in a golf tournament there, and has since fallen apart.

If Beta comes ashore in Texas it would be the ninth storm to hit the U.S. this year, tying a record set in 1916, said Phil Klotzbach, lead author of the Colorado State University seasonal forecast.

The 2020 summer has brought a string of natural disasters to the U.S., from hurricanes and tropical storms to a derecho that left wreckage from Iowa to Indiana, to fires in the West that have killed dozens of people and scorched millions of acres.

Across the Gulf, nearly 9.7% of offshore oil production and 7.7% of natural gas remains shut in following Hurricane Sally, which struck Alabama last week, according to the Bureau of Safety and Environmental Enforcement. More than 3.5% of offshore platforms remain evacuated.

The evacuations and shut-ins could increase as Beta starts to close in on the area, said Jim Rouiller, lead meteorologist with the Energy Weather Group. Oil refineries from Houston to Texas City and Galveston will also be at risk for outages due to flooding rains, the potential for storm surge and winds. The Houston Ship Channel has been closed ahead of the storm.

In addition to Beta, Hurricane Teddy is churning in the central Atlantic. Teddy could sweep close to Bermuda and possibly even strike Nova Scotia or Newfoundland this week.

About the photo: Waves move towards the shore ahead of Hurricane Laura in Sabine, Texas, U.S., on Wednesday, Aug. 26, 2020. Photographer: Luke Sharrett/Bloomberg