Medical payments per workers’ compensation claim in Texas decreased from 2014 to 2016 for claims with more than seven days of lost time, evaluated as of 2017. This followed several years of increasing medical costs, according to a recent study by the Workers Compensation Research Institute (WCRI).

“Payments for non-hospital care were the main driver of the recent decrease in Texas, with a decline in utilization of non-hospital (professional) services and little overall change in prices paid,” said Ramona Tanabe, WCRI’s executive vice president and counsel. 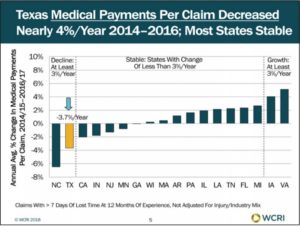 The study, CompScope Medical Benchmarks for Texas, 19th Edition, examines medical payments per claim, prices, and utilization in Texas and compares them with 17 other states. The study also examines the longer-term trends to show how these metrics of medical payments and care have changed following the Texas series of reforms.

“A series of reforms focused on medical costs, particularly House Bill (HB) 7 in 2005, impacted both prices and utilization of medical care as the various provisions were implemented beginning in late 2005 and continuing mainly through 2011,” said Tanabe.

The following are among the study’s findings:

To learn more about this study or to purchase a copy,visit https://www.wcrinet.org/reports/compscope-medical-benchmarks-for-texas-19th-edition.