When it comes to commodity theft, Texas probably is best-known for cattle rustling.

The Valley Morning Star reports now the state – or at least the Rio Grande Valley – is earning a reputation for citrus thievery, too.

Texas is the third-biggest citrus growing state in the country after Florida and California, with a crop value this year estimated at $87 million.

The losses being seen in the Rio Grande Valley aren’t just a bushel here and a bushel there, although those levels of theft certainly occur during the harvest season for Texas oranges and grapefruit.

“It’s that and a lot more,” said Dale Murden, president of Texas Citrus Mutual. “There was one report last year of an entire 10-acre navel orange grove that got stripped clean in one night. That is a big job.” 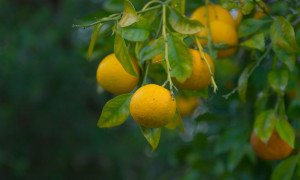 Murden and growers in the Valley say that even though most citrus is still green this year, theft is already becoming a problem. It becomes even more difficult to monitor citrus groves when you factor in the long, October-to-April picking season.

And with as much as half of Florida’s citrus crop destroyed by Hurricane Irma, it seems likely that citrus prices nationally will soar, making Texas’ crop that much more valuable.

“We’re already seeing it early in the season – it’s quite unusual this year,” said grower Susan Kawamoto of Mission.

Several growers said they recently met about the problem and are working through ways to minimize their losses.

“The sheriffs have their hands full, they do try,” Murden said. “We send Texas Department of Agriculture inspectors out to see if they can get a handle on it. Plus, we have two industry-employed inspectors as well.”

One of those investigators is Eduardo Chavez, who works for the Texas Valley Citrus Committee.

“They’re just all over the place,” he added.

Chavez said it involves more than a free supply of oranges and grapefruit for mom-and-pop fruit stands.

“This is people taking two or three truckloads,” he said. “Some of these places you’ve got people, workers for shipping companies, who we can’t pinpoint exactly. But you’ve got contractors that will take four trucks with oranges, and three make it to the warehouse, and one of the trucks doesn’t make it.”

A Texas Department of Agriculture spokesman says officials in Austin are aware of the theft problem, but that ultimately this is a local law enforcement issue.

He said there appear to be no penalty enhancements above existing criminal theft statutes for citrus, although an industry effort to do that through legislation in the last term of the Texas Legislature failed to become law.

“Sometimes, how far they get prosecuted in the system is a question, too,” said grower Fred Karle, noting that eventual fines or jail time upon conviction are based on the worth of citrus a thief has in his possession at the time of arrest.

“In other words, what they steal on one night or one time might not be a whole lot, but if people are doing that all year long, it adds up to a lot of money,” Karle said.

Most of the thefts occur at night when the orange groves are usually deserted. But legitimate activity in orange groves after dark is not always a robbery in progress, said Murden, who grows citrus himself in Harlingen.

“There is some night-time activity in citrus groves,” he said. “There are some grove managers who are spraying at night. It’s not that there’s zero activity that’s going on, but they can do late spraying at night because of wind.

“I spray at night for just pure safety reasons,” he said.

Growers say they hope the public can help them by calling 911 if they see suspicious night-time activity in a citrus grove, particularly those in rural areas.

For their part, Murden said growers are trying a new tactic this year to, if not stop the thievery, at least make it more difficult for thieves to fence stolen oranges and grapefruit.

“This year, Texas Citrus Mutual started a voluntary buyer-seller plan that can prove to authorities that I actually sold this fruit to so-and-so and they’re his,” Murden said. “If you don’t have that, it can lead to questions, and we can at least get the sheriff involved at that point.”

Murden said citrus growers might have to resort to placing night-time guards on their groves to protect their crops.

Onion growers have been using the tactic for years.

“When the price of onions is golden, they literally put on the guards in their fields to keep that from happening,” Murden said. “It’s a funny-sad indicator – when you don’t see people monitoring onion fields, it means there is no price for onions.”

Karle, who’s Karle Farms is headquartered in McAllen, has multiple groves of citrus stretching from one end of the Valley to the other. For him, it would be difficult from a logistical standpoint to try to police his own groves over such a broad area.

“It’s impossible to do that, especially in my instance, when I have maybe 40 different groves,” he said. “Some of the large growers that have all their groves in one place, they can block off the roads and have people out patrolling where they have thousands of acres in one location.

“But in my situation, the groves are spread all over,” he added.

Chavez said he’s familiar with the theft problem concerning onions. But then, he’s also an investigator for the South Texas Onion Committee.

With so much time devoted to so much thieving, it is perhaps understandable that Chavez turns philosophical about it all.

“You know, theft will always be around, you’ve got to be realistic,” he mused. “What we’re trying to do is kind of find a way to change the quantity.

“Instead of taking two or three trucks,” he added, “we want to bring them down to half a truck or one truck.”