New data analysis released by CoreLogic indicates that in the Orleans Parish, which encompasses the city of New Orleans, nearly 60,000 homes with a reconstruction cost value of more than $12 billion will no longer be located in a designated high-risk flood zone.

The Federal Emergency Management Agency (FEMA) designates flood zones, including Special Flood Hazard Areas (SFHA) which are considered high risk and for which flood insurance is mandatory for properties with a mortgage. Revised FEMA Flood Insurance Rate Maps (FIRMs) that become effective September 30 show these nearly 60,000 single-family homes in New Orleans moving from within a SFHA to outside of a SFHA. 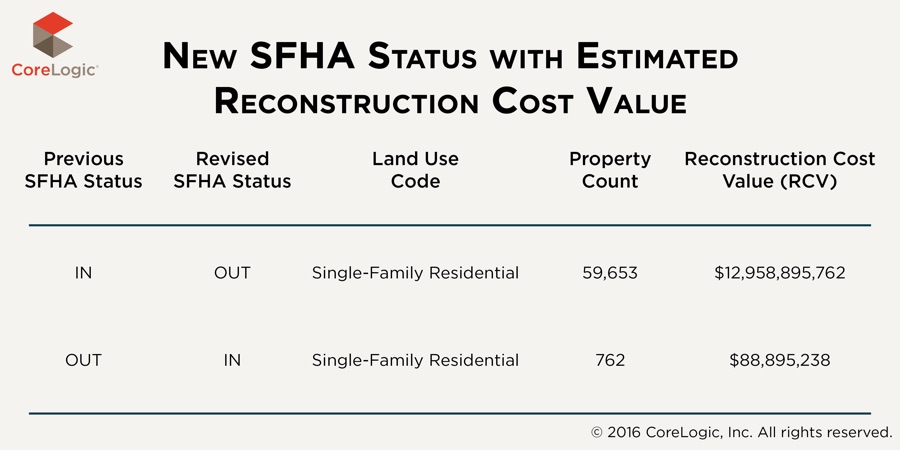 FEMA flood designations are important and provide an indication of flood risk, but experts agree that every homeowner should consider flood insurance regardless of whether or not their home is located in an officially designated high-risk flood zone. In fact, properties outside of mapped high-risk flood areas generally account for more than 20 percent of all National Flood Insurance Program flood insurance claims and receive one-third of federal disaster assistance for flooding, according to FloodSmart.gov. Notably, although not required by federal law, some mortgage lenders may also require flood insurance for homes located outside a SFHA.

In 2005, New Orleans was devastated by Hurricane Katrina, which caused flooding from more than 50 levee breaches and became the most destructive and costliest natural disaster in the history of the United States. The new maps—published by FEMA and developed through a partnership with the U.S. Army Corps of Engineers and community officials—are intended to reflect current flood risk based primarily on the Hurricane and Storm Damage Risk Reduction System improvements implemented since Hurricane Katrina.