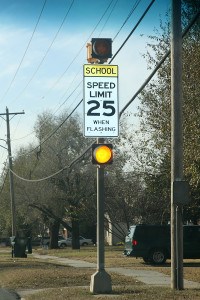 A Central Texas city will install a flashing-lights traffic safety device at a crosswalk where two teens died after being hit by a truck.

The Austin American-Statesman reported Monday that a police investigation concluded the victims were looking at a hand-held device before the crash. The newspaper cited a Feb. 3 memo from city transportation director Robert Spillar to the Austin City Council.

Witnesses told police that 17-year-old Joshua Milton and 16-year-old Melodie Hewitt also failed to look to the left before stepping into the street Dec. 27.

Spillar says the victims were not within the marked crosswalk, at South First Street and Thelma Drive.

A crosswalk device will allow pedestrians to push a button and activate a flashing-light system that warns drivers to slow down and stop.