Parents of a student at a junior high school in Gray, La., say in a lawsuit that their son was taunted into fighting a fellow student in what amounted to a “fight club” at the school. 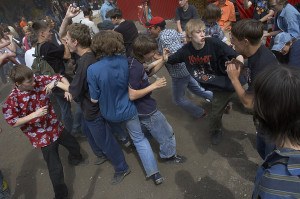 The Houma Courier reports that the lawsuit was filed in federal court in New Orleans last month by Tyrone and Kathy Bella. They say their ninth-grader was taunted for weeks until he fought another student in a school bathroom in August. He ended up with broken facial bones, requiring surgery and keeping him out of school for weeks, according to the lawsuit.

“It’s a rite of passage,” said Paulette LaBostrie, the Bellas’ attorney. “He’s not the only child that has fought before, but he was only one that got hurt.”

Dodd said there was a fight but it was “spontaneous.” He said the lawsuit is frivolous and has “no merit,” a claim that LaBostrie disputes.

“The school has a duty to monitor where he was,” LaBostrie said. “They know about the fight club, they knew the second-floor bathroom was unmonitored while he succumbed to fighting.”

LaBostrie said the Bellas planned to home-school the child because of what happened.