Motorists who are hunkering down because of social distancing are continuing to file fewer collision claims, but a rash of windstorms, hailstorms and wildfires in August may bring total auto property damage claims numbers almost to normal levels if the destruction continues, according to a report by CCC.

Overall, the total number of repairable appraisals was 14.9% in August 2020 compared to August 2019. But excluding comprehensive claims, auto damage claims were down 20.5% from the prior August, compared to the 24.7% year-over-year decrease reported in July.

CCC said severe weather associated with Hurricane Isaias, hailstorms in Minnesota and South Dakota and the derecho that blew 100 mph wind through Iowa led to an increase in comprehensive losses in the first half of the month. 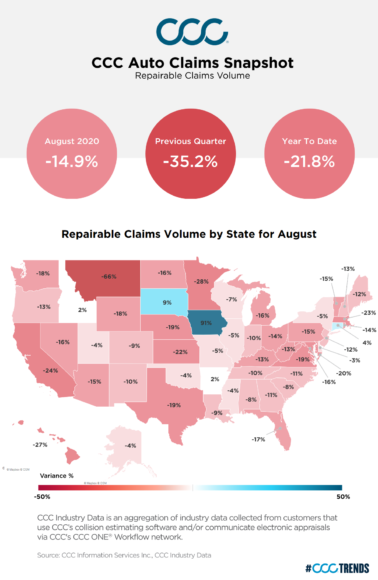 “Losses from the wildfires in California and Hurricane Laura in Louisiana and Texas also continue to come in,” the report by CCC analyst Susanna Gotsch says. “Increases in comprehensive losses overall will help offset the decline in non-comprehensive losses and if September weather is as volatile, could result in claim counts for the year down only about 5%.”

Gotsch first reported the potential for a reduction in auto claims caused by the coronavirus pandemic in a report released in April. At the time, CCC had anecdotal data such as a reported28% drop in visits to Seattle shopping malls, a sharp reduction in vehicle traffic in China in January and a decline in retail gasoline purchases.

Since then, CCC reported a 34.5% decline in damage claims in, compared to the prior May; a 25.7% drop in June and the 24.7 decline in July. August would have continued the trend of a modest to normal claims volumes if it had not been for the sharp jump in comprehensive claims.

The number of auto damage claims in Iowa jumped 91 percent in August. CCC said comprehensive claims accounted for 70% of the total loss valuations and 55% of all repairable appraisals.

“This underscores both the severity of the storms and the fact that non-comprehensive losses overall remain down,” the report says.

A powerful derecho ripped through eastern Nebraska, Iowa and parts of Wisconsin and Illinois on Aug. 10, flipping cars and toppling trees. The National Weather Service reported a 100 mph wind gust west of Chicago.

Elsewhere, collision damage claims remained much further below historic levels in areas that saw a summer surge of COVID-19 infections.San Francisco, Los Angeles, Dallas, Houston, and El Paso saw non-comprehensive appraisals down between 27% to 30%, while volume in other areas such as New York City, Chicago, Atlanta, Denver was down between 15% and 20%, CCC said.

The company said government data showed that interstate miles driven on most road types remains below average in many cities.

“With the number of COVID-19 cases rising again as many return to school, and the approach of normal flu season, many companies plan to keep at least part of their staff remote through the remainder of the year,” the report says. “This will likely mean non-comprehensive may remain down -10 to -15% for full year 2020.”

About the photo: A sign reading “For Sale (Cheap)” is seen on a damaged vehicle in Marion, Iowa, Thursday, Aug. 20, 2020, as trees a severely damaged by a an Aug. 10 derecho are cleaned up. (Jim Slosiarek/The Gazette via AP)