Long before the popularity of the immense pipe organs commonly found in churches from the 16th century on, an Alexandrian engineer invented the first keyboard instrument in 3rd Century BC called the Hydraulis. The progeny of all modern keyboard instruments utilized hydraulics to allow multiple notes to be played at the same time by using air, controlled by 24 different keys, to blow through an array of pan pipes. For centuries, the Hydraulis was the most important instrument through the rise and fall of the Roman Empire, and beyond. Though the early versions utilized converted water energy pushed into a “wind chamber” in order to operate, the water energy evolved into a bellows to provide airflow through the various length pipes producing variations in timbre, pitch and volume. 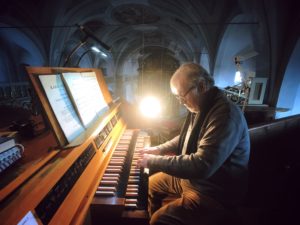 As we fast forward to modern times, we have the arrival of the electronic organ in the early 20th century, and the 1930’s brought about the first Hammond organ, the Model A, invented by Laurens Hammond and John Hanert in 1934. Fifteen years later saw the advent of the B-2 and C-2 (spinet and console versions). These models replaced the bellow and pipes of their predecessors with a rotating metal tone wheel near an electromagnetic pickup to generate sound. Five years later came the introduction of the B-3 – quite possibly the most popular organ ever produced. Production continued through the early 1970’s, but due to the cost of tone wheels, Hammond struggled to stay alive, and eventually went out of business in 1985. The Hammond brand has changed hands a few times since its inception, and through the 70’s and into the 80’s, transistors replaced the early tone generators of the famous B3, and various attempts at recreating the sound of the B3.

Familiar with the history of Hammonds, our music team began the task of determining an accurate replacement. The Super B was Hammond’s first fully-digital sampled organ and was only produced in 1986. There is little written about the quality of the organ, but it was not very technically reliable and it was considered fragile. It had touch-sensitive keys and a MIDI (musical instrument digital interface) connection using ROM cards to employ various sounds/voices. As the Super B relied on digital “samples” of sound, rather than tone wheels, the search for the replacement did not include today’s version of the B3, the B3MK2, which is valued at $26,995.

Our findings showed the Hammond Super B had very little vintage value due to the quality and lack of parts. Vintage collectors are typically drawn to models that employ the tone wheel. Armed with that knowledge, our team determined an accurate and acceptable replacement value for the Super B in the Hammond Model A-3 Heritage Pro System with XK-5 Tone wheel-style Drawbar Organ and accessories available in the current market retailing for $10,270.00.

Ryan Paveza is an Antiques & Collectibles specialist for Enservio (www.enservio.com), a provider of contents claim management software, payments solutions, inventory and valuation services for property insurers. Paveza worked at the Art Institute of Chicago as a collection manager and research assistant. He is certified by the American Society of Appraisers (ASA) and has passed the Uniform Standards of Professional Appraisal Practice (USPAP). Contact him at rpaveza@enservio.com.

Other “Cases” in the series:

The Case of Nearly Being Pushed Through the Wringer

Case of the $30,000 Vintage Hollywood Moviola

Case of the Antique Ivory Tusk