A new research brief released by the National Council on Compensation Insurance (NCCI) examines Monday claims –claims of worker injuries thought to be unrelated to their jobs and likely happening on the weekend – and whether the Affordable Care Act (ACA) had an impact on such claims.

Key findings suggest that the ACA has no real impact on share of claims by day of the week.

The brief, written by Chun Shyong, Barry Lipton, and John Robertson, found that:

The ACA became effective on January 1, 2014 and offered healthcare coverage through state and federal insurance exchanges. An estimated eight million workers gained health insurance coverage as a result of the healthcare reform law.

As a result of the decrease in workers’ comp frequency, the authors state that “It is not sufficient to only look at frequency declines for claims occurring on a given day of the week—say Monday—because all workdays are experiencing the decline.” They further note that if the ACA does have an effect, it might be evident as a bigger decline on Mondays than on other days of the week.

Claims referred to in the report include both medical only and lost time claims. 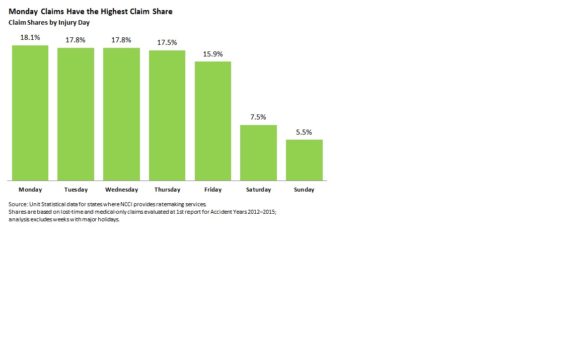 Monday claims were generally higher than on any other day of the week, the report noted. This was true for both pre-ACA and post ACA periods. While this could be due to non-related injuries that happened on the weekends, the authors speculate that it might also be due to workers adjusting to returning to work after the weekend. Another possibility “is that the distribution of claims by day of the week might simply reflect the numbers of people working different days of the week.” The authors explain Friday may have the lowest reported workers’ comp claims simply because more workers take time off on Fridays, as opposed to other days of the week.

Of interest, the report found that Monday claim shares were not related to changes in the uninsured rate measured by state. To determine this, the authors divided the 38 NCCI states into three groups:

The NCCI report also looked at the types of injuries claims on Mondays to see if certain injuries were more likely to be reported on that day of the week. The authors found that lower back injuries and strains represented a greater share of Monday claims, though there was no impact resulting from whether workers were uninsured or not. 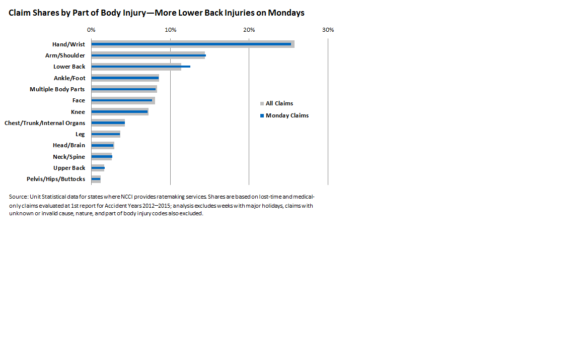 Certain industry groups may impact the types of claims made during the week. For example, the authors found that those working in the goods and services industries reported more injury claims on Sundays than on Mondays. 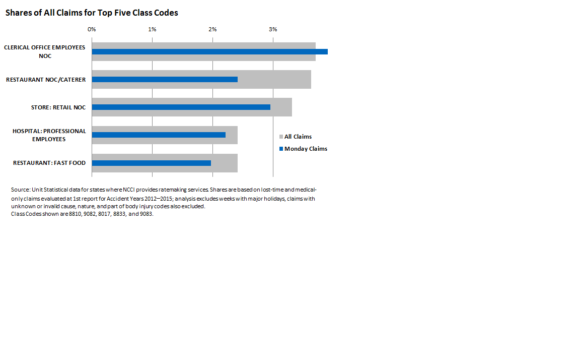 Classes, too, can affect the distribution of claims by day of the week. The report found that clerical office employees – the largest classification – reported the most Monday claims and the most injury claims overall. In addition, restaurant and retail workers reported more claims on the weekend, than during the typical five day work week. The authors state this likely due to work patterns associated with these classes.