The Wild West days of unregulated recreational drones may be nearing an end.

A bill close to passage in Congress would repeal the current exemption for hobbyists from regulations and for the first time require them to take a test before flying. It also says such operators must fly no higher than 400 feet and stay clear of traditional aircraft. They may have to eventually install radio identification signals on the devices.

The measures have been endorsed by government agencies and industry groups to combat growing numbers of safety and security incidents, and to ensure a predictable environment for burgeoning commercial operations such as deliveries.

But it will also significantly change the ground rules for users of products that have grown enormously popular, generating a following among fiercely independent purchasers who want to fly with limited or no restrictions. The FAA estimates 1.6 million drones will be sold this year in the U.S. 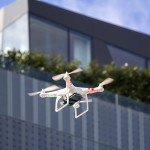 The civilian drone world has evolved in recent years from one dominated by hobbyists to growing involvement by companies seeking to profit from unmanned flight in everything from infrastructure inspections to drone deliveries that are already subject to regulations. These uses have been embraced by industry behemoths including Intel Corp., Berkshire Hathaway Inc.’s BNSF Railway Co., Amazon.com Inc. and Alphabet Inc.

Some hobbyists are urging lawmakers to oppose the changes, which are included in a bipartisan appropriations bill on aviation policy that passed the House Wednesday night and could be voted on by the Senate within days.

“It’s just being shoved down our throats,” said Sean Wendland, a drone enthusiast from California, who is helping form an advocacy group for hobbyists who guide their drones via a video stream providing a pilot’s-eye view from the craft. “We’re literally losing our freedom to have input into the process.”

Flying by video – known as first person view or FPV – would be allowed for hobbyists for the first time under the law, but only with an observer acting as a spotter. That’s a restriction that Wendland says his fellow pilots in the nonprofit FPV Freedom Coalition resent. They believe their flights, which stay at low altitudes and away from airports and other aircraft, are safe.

Congress’ attempt to create new restrictions will harm people like him, he said, but won’t prevent the nefarious users who fly close to airliners, drop contraband into prisons or attempt terrorist attacks.

The Academy of Model Aeronautics Inc., which represents almost 200,000 model aircraft enthusiasts and helped negotiate the legislation, also disagrees with elements of the version that emerged Sept. 22 from talks between the House and Senate, said Chad Budreau, the group’s interim executive director.

“These new restrictions may have a detrimental impact on long-standing model aviation activities that support local charities and non-profits,” Budreau said.

The law also weighs into the controversial issue of whether drones should have radio beacons that identify their position and registered owner. It would grant the Federal Aviation Administration the authority to require that. The agency is drafting such a regulation at the request of homeland security and law enforcement agencies and has signaled it may require retrofitting millions of drones already in use.

Height Restrictions
One provision contained in the law prohibits hobbyists from flying more than 400 feet (122 meters) above the ground, which brings them in line with restrictions on commercial users. However, groups like AMA are concerned that there are no procedures to get a waiver and its members sometimes go above that height with government permission at airshows and other events, Budreau said.

The group is also concerned that the law would be too restrictive on educational uses of drones for students in middle and high schools. In addition, it worries the new license requirement for about 1 million U.S. hobbyists would drown the FAA in new work it isn’t adequately funded to perform.

The Drone User Group Network, which says on its website that it represents 20,000 people, is urging its members to call on lawmakers to vote against the bill.

“The bill has many positives for commercial operators, but is overwhelmingly bad for recreational fliers,” said Steven Cohen, president of the group.

Lawmakers who wrote the bill, which was hammered out as a compromise in recent months and contained in legislation authorizing FAA for the next five years, say hobbyists have nothing to worry about and that FAA has authority to grant waivers for such things as flights above 400 feet. Revamping the law is critical to bringing order to an aviation system flooded with drones behaving badly, they say.

“Each month, the FAA receives more than 100 reports of drone sightings by pilots, citizens, and law enforcement,” Representative Peter DeFazio, a Democrat from Oregon who authored much of the drone legislation, said in an emailed statement. “These operators have impeded wildfire suppression, including in my district this summer, and have put lives in danger through collisions or near-collisions with manned aircraft.”

The legislation would create a “minimal burden” on hobbyists while restoring FAA’s authority to oversee these flights, DeFazio said.

The bill is supported by the Commercial Drone Alliance, a Washington-based advocacy group representing Alphabet’s Wing as well as other drone businesses.

“While technology has surged ahead, policy making has lagged behind, particularly around drone security issues,” said Lisa Ellman, a Washington lawyer who is co-executive director of the coalition. “The bill being considered by Congress would take some important steps forward, and would promote innovation while enhancing safety and security. We are hopeful that the bill passes expeditiously.”