Private passenger auto insurance had been experiencing a steady rate of declining claim frequency over the last two decades with a variety of factors having been identified as contributors to the trend, including an aging population, fewer miles driven, graduated licensing for teenagers, higher deductibles and more vehicles than drivers.

Several additional factors came into play with the recession, including higher unemployment and fewer miles driven.

Recovery post-recession however occurred not only in the economy, but also in both auto claim frequency and loss costs. According to the ISS Fast Track Plus reports, private passenger auto (PPA) collision frequency returned and exceeded levels last seen in 2007.

Now, after several quarters of increases in frequency, the industry has begun to see auto claim frequency begin to level off. Yet, despite this, because the number of insured vehicles on the road has increased, the actual number of accidents continues to see moderate growth.

The chart below illustrates how accident counts have grown; specifically, the year-over-year change in the number of auto claims where the vehicle was identified as repairable.

Because this is looking only at repairables, the claims flagged as total loss would not be included. However, the total loss percentage identifies what percent of overall claim counts were flagged as total loss; so as it goes up, it will also impact overall repairable vehicle counts. This number roughly estimates the number of vehicles that could end up in a repair body shop for repair (although a certain percent of customers will opt not to repair their vehicles), and as such, is essentially a proxy for collision repair industry sales. 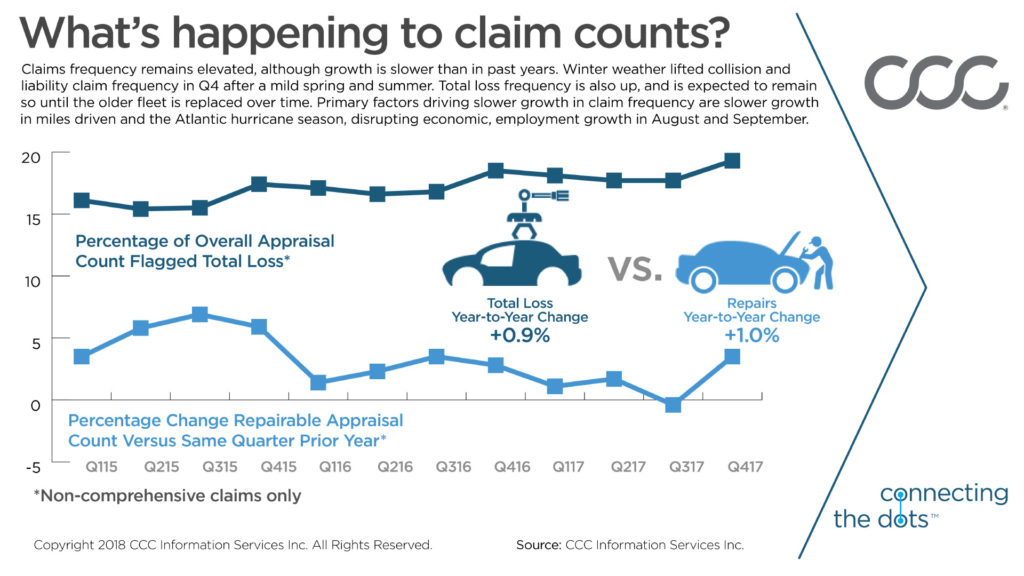