There are several factors that make reconstructing bicycle accidents more difficult than reconstructing car crashes, according to Tim Nelson, a biomechanical engineer with MEA Forensics and an experienced cyclist.

During a recent panel discussion on the subject at the Combined Claims Conference held in Orange County, Calif., he outlined some common bike accident scenarios as well as evidence that can assist an investigation. 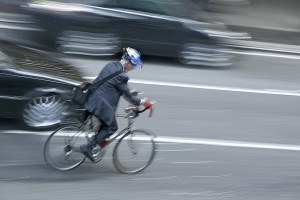 The obvious differences between a bicycle and a car, according to Nelson, are what make bicycle accident reconstruction more difficult. With only two wheels, a bicycle requires balance to maintain control. In addition, a bicycle has a higher center of gravity and a shorter wheelbase than a vehicle.

here are a few ways a bicycle can fall without a collision occurring, Nelson explained. He outlined three scenarios:

When questioning a bicyclist about an accident, it’s important to ask if he or she was trying to regain control or avoid an impact. Nelson, also emphasized asking about cyclist experience.

“Find out how skilled that cyclist is,” said Nelson.

Nelson, an avid cyclist since he was a child, said the weight ratio of the bicyclist is an important factor too. While a driver’s mass has little influence on a car, the center of gravity on a bicycle is largely determined by the rider.

“Because of this you have a lot of weight shifts as you’re braking,” said Nelson.

He also noted that the rear brake is less effective than the front brake.

Nelson described the different types of evidence available in car versus car and car versus bicycle collisions.

In addition, Nelson said bicycle-related injuries are treated differently than injuries sustained in a car crash. Car crash injuries can be used to reconstruct an accident, while injuries related to bicycle accidents can only be used to determine accident directionality.

Szu Pei Lu-Yan, an attorney with Graves & King, explained the legal strategy in these cases should include:

She indicated it’s important to view the area of impact and determine if there were any sight line obstructions.